An Indian summer from Yushan Li and Jun Zhou. 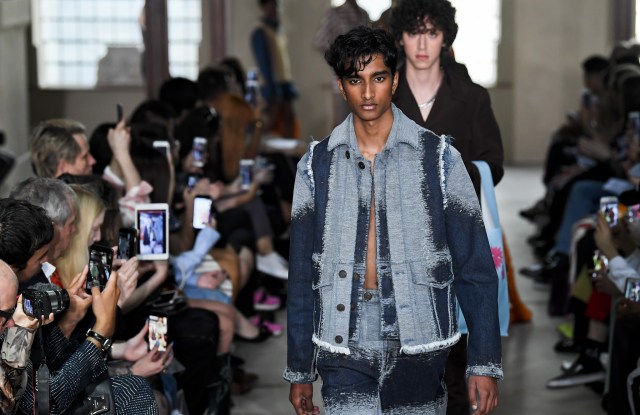 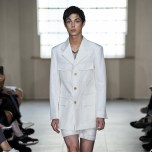 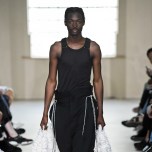 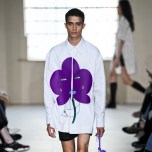 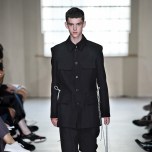 Over Chinese New Year, Pronounce designer Jun Zhou took his mother on a trip to Kolkata, India, to visit a friend from his days at the London College of Fashion. There, he visited the vast Mullick Ghat Flower Market on the bank of the Hooghly River, in the shadow of the Howrah Bridge. The contrast he saw, between the natural beauty of the millions of flowers and the toughness of an urban metropolis, inspired the strong collection the Zhou and fellow designer Yushan Li showed for spring, their third show in London.

It was a fetching blend of great tailoring and workwear that nodded to the workwear worn by Mullick Ghat’s flower sellers in looks like a suit of frayed denim panels, and in the garlands of crochet wool flowers the models carried.

Petal-shaped cutouts that revealed bare shoulder blades, were a neat reference to the theme, though it looked better on shirting than on the tailoring and outerwear. Coats and jackets had tabs at their backs, drawing in waists for a peplum effect, which looked especially appealing in one women’s cream coat.

Rich spice market shades of cumin, turmeric and saffron, and Holi festival-bright pinks and blues brightened the palette, while a printed motif of a cartoony flower with the face of an Indian man was the designers’ spin on emoji ubiquity and was smattered throughout the collection.