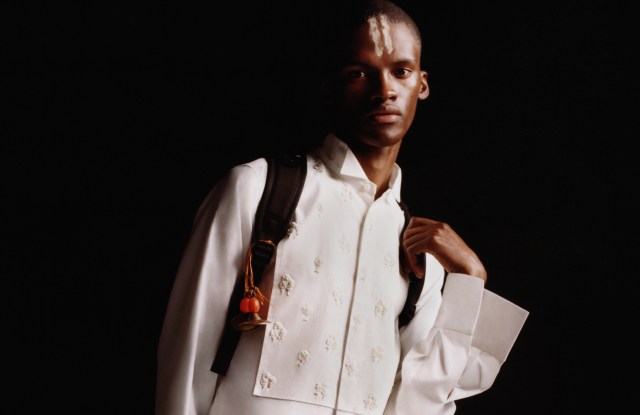 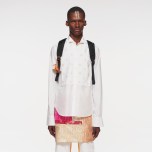 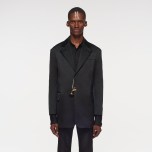 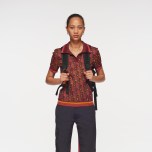 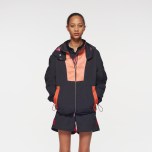 Having chosen to take a step back from the hustle and bustle of the catwalk this season, Grace Wales Bonner channeled a newfound serene and self-assured energy into her spring men’s and women’s resort collection.

Her entry point was an exploration of Eastern philosophy through many a different lens: Groups of travelers making long journeys through the East in performancewear, Indian-inspired eveningwear dating back to the Twenties and African-American interpretations of Eastern tradition through music.

“It’s this mix of different histories and different interpretations of the East through time. It inspired an eclecticism of dressing and interpreting your surroundings,” said Wales Bonner during a preview.

The mish-mash of different times and cultures resulted in an intriguing blend of styles and silhouettes, which demonstrated Wales Bonner’s design authority, albeit in a quiet way.

Sumptuous brocades were layered over track pants and paired with embroidered shirts, sporty nylon anoraks were lined with the same brocade fabric, shorts came heavily draped on the waist and slim tailored suits were enveloped in embellished tulle.

As the men’s looks embraced traditionally feminine elements, Wales Bonner also incorporated a wider range of women’s looks into her collection for the first time. They ranged from loose tailoring to sporty T-shirt and track pant combinations and blended into the men’s looks seamlessly, highlighting the designer’s continued mission to challenge the traditional notion of gender.

Another focus for the young designer was to offer clothes that carry a deeper meaning. That’s why she added crystals like rose quartz, known for their healing properties, onto lightweight, viscose-linen suits and added symbolic prints onto lightweight technical fabrics or loose T-shirts — the designer’s way of making a subtle foray into sport’s wear or relaxation wear, as she prefers to call it.

Writing from the book “Be Here Now” by Ram Dass was incorporated onto a range of colorful, loose track pants, tops or anoraks that would work in a yoga studio as much as they would on a lazy Sunday. Elsewhere, shirts were printed with imagery of the work of the African-American artist Terry Adkins known for experimenting with musical instruments and sculpture and “understanding the concept of incorporating sound into aesthetics.”