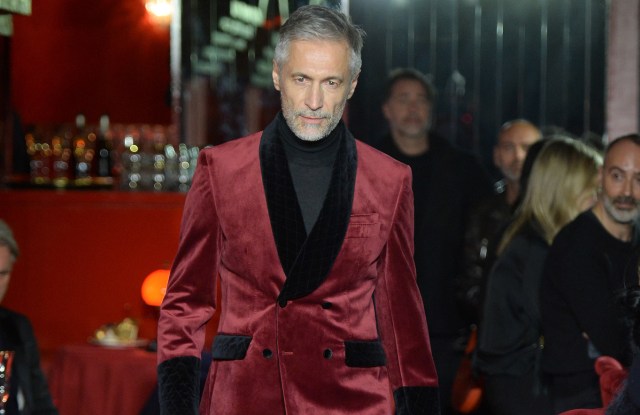 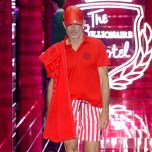 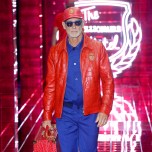 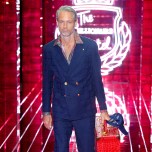 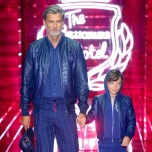 Taking in a fashion show, Bellini in hand. That’s the way it’s done at the Billionaire Hotel. The catering, which also included hunks of lemon-scented meringue cake, was courtesy of Monte Carlo restaurant, Cipriani.

But the vibe nodded more to the storied Hotel Bel-Air in Los Angeles. For anyone searching for a link, Billionaire owner Philipp Plein is planning to move into his Bel Air mansion, Chateau Falcon, over the coming months, according to a member of his entourage. “It’s the biggest house in Bel Air, and possibly Los Angeles. It’s probably as big as the White House,” he boasted.

A flow of bellboys wheeling trolleys stacked with the brand’s new luggage line — hard cases wrapped in colored croc, including a guitar case, likely with a price tag fit for, well, a billionaire — proceeded down the red-mirror-tiled runway, or the “hotel lobby,” as per Plein. On their heels came the familiar Billionaire cast of squinty-eyed, bearded and tattooed senior models, moving with the ease of a hotel guest headed to the bar or the spa. On the soundtrack was “Hotel California,” “Blue Hotel” and a bit of Elvis.

Some had on their thick, toweling dressing gowns emblazoned with the Billionaire crest, or black palm-print jacquard pajamas with matching slides. Others were in a more daywear mood, in palm-leaf print silk shirts, pale pink tailoring, and a white unstructured suit with navy contrast piping to a shawl collar. For after dark, shine was key such as on a shawl collar evening suit with golden palm tree embroideries or a black silk look with gleaming oversize paisley motifs.

One guy glided by with a full croc coat hanging at his shoulders and a matching weekend bag, followed by two bodyguards with earpieces, which prompted a few sniggers from the audience.

Sharing some comments before the show on the brand’s momentum since acquiring it two years ago, Plein said Billionaire is doing “better than we could have ever expected,” with sales in 2017 up 50 percent, year on year.

“Today we have 25 stores, this year we opened in Paris, Monte Carlo and Amsterdam, which is important for us as we believe in [brick-and-mortar] retail,” he said.

Plein demonstrated he is also looking to cater to the aspirational Billionaire customer, with a range of kids’ looks — including pint-sized croc jackets — also featured in the show.