In his quest for weightlessness, Alessandro Sartori in his development of an athletic sartorial journey experimented with performance fabrics to the lightest of nylons. 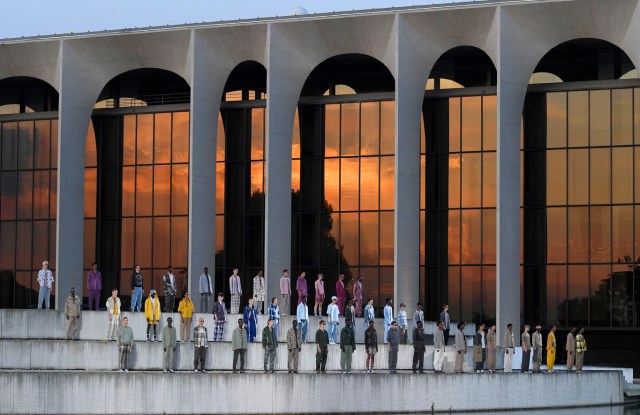 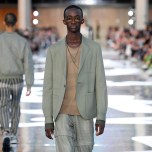 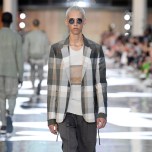 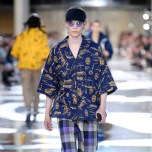 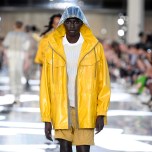 For his latest Milan tour, Alessandro Sartori at sunset on Friday led the fashion crowd to the Palazzo Mondadori, a monumental Oscar Niemeyer-designed structure rising out of a flat landscape and framed by a series of concrete arches.

Set in a nature reserve on the edge of the Idroscalo Lake, the spectacular waterside building combining concrete and stone was commissioned in 1968, the same year in which Zegna’s ready-to-wear line was launched. And Sartori saw it as the perfect architectural incarnation of the design principles of his spring collection: “graphic and voluminous, but without weight.”

A bridge stretching across the water, with schools of small fish darting through, had been transformed into a mirrored catwalk bordered with benches, giving guests the feeling of walking on water as they took to their seats.

Sartori continued his development of an athletic sartorial journey. His exploration of fabric research — one of his personal obsessions — centered on a quest for weightlessness from performance fabrics, which stretched from a waterproof membrane to the lightest of nylons, like a voile weighing 90 grams that worked best on tailored trackpants. “It’s a shirt fabric, basically. To stitch by hand a parka is very difficult, but the final result packs into nothing and has a beautiful shape,” the designer said during a preview of the collection.

These shirt-weight fabrics were used on clothing, outerwear, jackets and suits, including a new three-piece “bomber suit,” one of a range of contemporary styles with interchangeable tops and jackets. Shirts and jackets collided in hybrid forms with an oversize fit, experimental collars and playful double sleeves.

The boxy proportions recalling Japanese workwear, like the yellow blouson in a souvenir print with an oversize boxy sleeve and a cropped anorak in a fresh linen crepe, felt very of the now. The line’s souvenir print was playfully youthful and enhanced the carefree young look that the designer is going for.

The accessories included a “see-now-buy-now” shoe — the new “Cesare” sneaker in calfskin and mesh, bicolored round laces and an extralight rubber sole with leather inserts. Some of the models also toted bags in the same design as the brand’s shopping bags.

The golden light brought out the summery palette, which ranged from sage and olive green to sunflower yellow and vibrant pinks, including a red-onion shade.

A pink and gray look with an old-school vibe pairing a striped jacket with two different plaids on the shirt and pants served as a refreshing counterpoint to the progressive streetwear direction and brought a softer mood.

And therein lies Sartori’s strength: Building a balance between driving fashion trends, what is happening on the street and the world of Zegna, he manages to find that sweet spot.