The designer set out to explore the notion of contemporary masculinity, with the collection’s emblem a Hawaiian-style flower that was never girly. 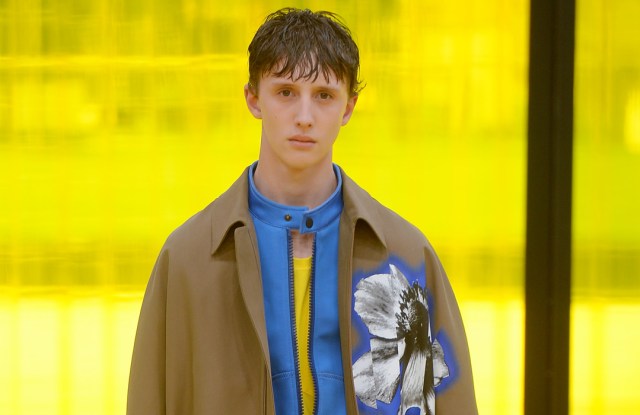 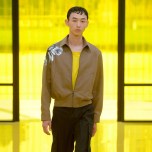 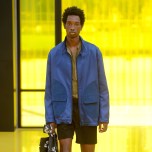 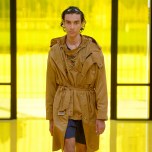 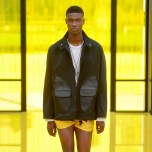 In an adventurous, sea and surf-faring mood, Neil Barrett, who has a thing about male uniforms, set out to explore the notion of contemporary masculinity, with the collection’s emblem a Hawaiian-style flower that was never girly.

The designer worked photographic treatments of anemones onto utilitarian macs, T-shirts and sweatshirts, placing them at the breast and shoulder in place of military emblems and medals.

Some of the prints had a strong Pop Art feel, others came graphically sliced, with shadowy black prints of the flowers staining a range of looks. But mainly it added a surf vibe, opening the gates for a strong water-sport theme.

His signature Nineties aesthetic was intact, folding in scuba underlayers and jackets inspired by the hi-tech dry suits worn by deep sea divers. The cut of the trenches, with their dropped shoulders and rounded shapes, were even based on their lines.

The designer sprinkled in sure-sell cargo pants cut like joggers, and cool dressier looks, like a gray tux with a Nineties fit.

Moving between urban and sportswear moods, the outerwear was ever strong and plentiful, with the bright yellow rubber caban coats, colored anoraks with patch pockets and tobacco-hued technical parkas among the standouts.

The women’s line drew on the men’s wardrobe, headlined by brightly hued sporty racer-back dresses made from sheer nylon and mesh, accessorized with sporty backpacks and scuba sock boots.

For James Harden, who took in the show with fellow player P.J. Tucker, it was a slam dunk. The Houston Rockets superstar, who’ll soon be heading to Paris to take in the Off-White and Louis Vuitton shows, disclosed a collaboration with Barrett may soon be in the works.