The designer in this collection based on reworked basics paid tribute to New York. 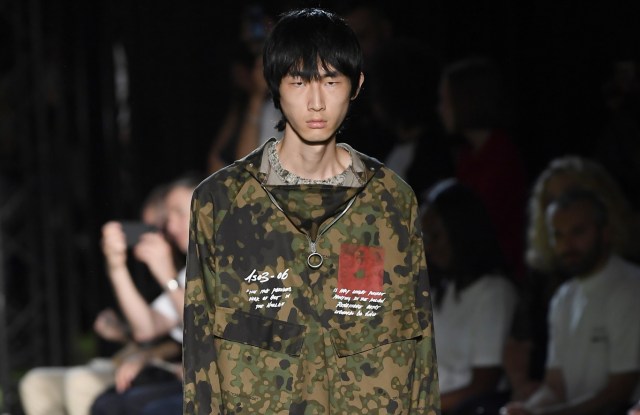 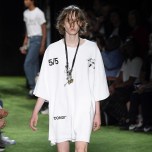 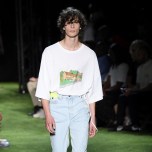 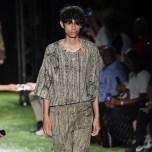 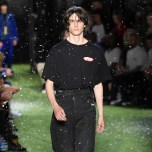 With his debut men’s show for Louis Vuitton scheduled for Thursday, Virgil Abloh has made it — big time — in Paris. The setting for the new men’s collection from his own line, though, was New York, New York.

With AstroTurf for the set and stiflingly dark and sweaty conditions, Abloh re-created a hot summer night in a New York park — perfect for an already sweltering Paris morning.

“There’s something about that synergy — the mix of the people with the temperature — that I wanted to use as the muse,” said the designer, who — when he’s in the city — loves to sit on a bench and people watch, taking in “this cross-section of rich and elite and also thugs and street kids.”

The designer used as his main ingredients denim, T-shirts and sweatshirts, taking the denim idea and twisting it — quite literally — with the seams of pants spiraling around the legs and a bleached denim jacket with a double collar distorting around the body.

Reinterpreting basics from street culture, with in mind “the kid in New York that you see with the skateboard under their arm,” the designer played with proportions, pumping up the volume on graffiti T-shirts, and experimenting with denim treatments moving from acid washes to a flocked indigo surface on a simple denim jacket and pants. Ripped jeans came decorated with sequins or the word “Off” embroidered in colored Olde-Worlde lettering. Graphics inspired by American graffiti artist Dondi White also peppered the collection.

Looks were strung with industrial jewelry, hardware and keychains, with models sporting Dr. Martens boots, clear Rimowa backpacks with Off-White-logo shoulder straps, and two new Nike x Off-White colorways: a black version of the Nike Blazer Mid and a white and silver version of the Air Max 97. Other safe-bet till-ringers included the denim fishing vest with oversize pockets to stuff with gadgets.

With his signature arrow logo and words printed on items including shoelaces, this merch-friendly branding exercise was all about keeping it real. Down to the Bart Simpson T-shirts, as a “poster child for the attitude.”

“It’s not supposed to be fashion, fashion to me has gone on its own path and I’m just interested in designing about reality,” said Abloh, who’s possibly saving his creative energy for his other gig.

A surprise paper snowstorm mid-show vexed guests, the soundtrack — Kraftwerk’s “Trans-Europe Express” — briefly cutting to “White Christmas.” One editor compared the experience to “the new version of being tarred and feathered.”