The theme was tennis, but the big news was a partnership AS Monaco FC as the official fashion sponsor. 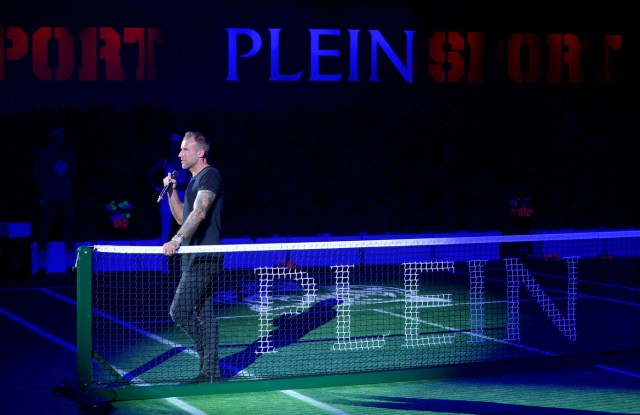 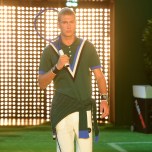 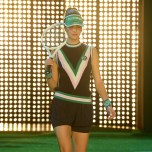 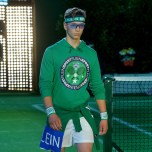 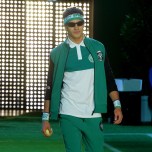 His showman instincts in fine form, Philipp Plein had a few surprises up his sleeve: Paris Hilton as a guest walker in the show, and the announcement of a partnership with AS Monaco FC as the official fashion sponsor. (With the Fifa World Cup under way, ‘tis the season, after all.) Before the show, Plein took to the show’s set, a full-size grass tennis court based on the Beverley Hills Tennis Club, with AS Monaco’s vice president Vadim Vasilyev.

Vasilyev talked about the similarities between the two brands. “Philipp has built this empire and he often likes to say that Philipp Plein is the underdog challenging the biggest brands in the world.”

“Yes, we are, we are,” interjected Plein, with in the background a scoreboard marked “Plein 1, Sport 0.”

Plein then welcomed on stage Pietro Pellegri, one of the team’s youngest players, to present a Philipp Plein-branded jersey. “Here you see what makes fashion and football such an exciting and interesting combination. We’re here to dress all these good-looking guys — we try to make them even better looking, I think we’re good at that,” said Plein, adding that he plans to welcome everybody to the club’s stadium next season to celebrate.

The designer also shared some information on the performance of the group’s business, saying 2017 was the most important year yet, with overall growth of more than 25 percent. “This year we are targeting another 15 to 20 percent growth,” he said, without disclosing figures.

The theme of the spring show, meanwhile, was actually tennis, with a couple of Plein Sport-clad players batting a ball about as the models sauntered by.

The look was vintage-influenced, but using hi-tech materials, with Björn Borg and John McEnroe mentioned as references in the show notes. Training jackets carried piping details and old school cardigans were edged with graphic contrast lines, with in the mix baseball jackets, polos with exaggerated V-shaped prints and color-blocked tracksuits. The men’s palette went from a mix of white and tennis-court green to a black, white and silver section with a tougher, more street attitude.

The women’s offer, with the models channeling a young Billie Jean King as per the notes, included white pink and silver athletic bodysuits, track pants with neon side stripes that ended in fringing and swimwear. The looks came accessorized with visors, headbands and wayward piled up hairdos resembling Barbie on a bad hair day.

Hilton opted for black studded booties over sneakers, camping it up for the crowd, and joining Plein on the trophy podium to shower the models with Champagne.