With more support from Puma and Swarovski, Jahnkoy’s Maria Kazakova is able to expand on her goal of preserving traditional craftsmanship. 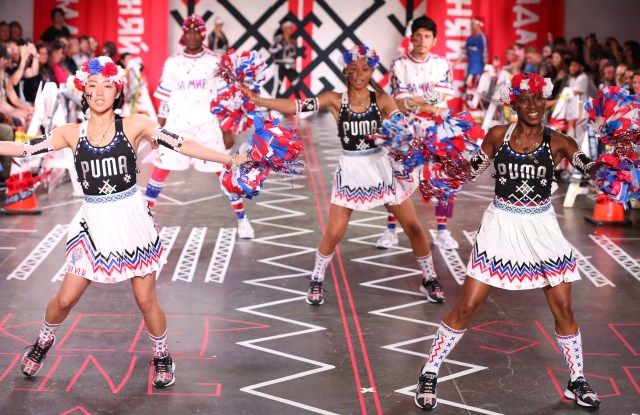 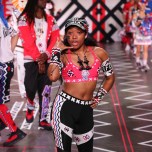 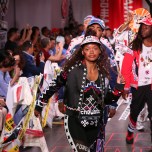 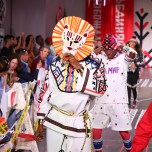 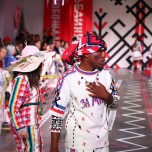 Maria Jahnkoy, whose real name is Maria Kazakova, is Siberian and studied at Central Saint Martins and Parsons, has received a lot of support from the industry with her brand narrative, which is centered on preserving traditional craftsmanship and reworking it for a new generation.

She was shortlisted for the 2017 LVMH Prize and has found fans in consultant Julie Gilhart and Bruce Pask, the men’s fashion director at Bergdorf Goodman and Neiman Marcus. Kazakova also has the support of Puma, Swarovski and the CFDA’s Elaine Gold Launch Pad program.

Her goal has always been to connect larger companies with local artisans, but with the extra help she’s been able to expand on that and bring more makers from Brooklyn and India into the mix. The show, which was more like a theatrical art project, was a collective effort as well. Titled “Deceived: No More,” the performance explored how the fashion industry impacts cultural identity. The presentation, which was choreographed by Nathan Trice, was broken up into three parts: chaos, unification and order. Much like her previous presentations, she made the runway mimic a chaotic city street that was dotted with orange cones and caution signs — one read “Separation is No Longer Cool.”

She called the first group the city group. They wore activewear pieces from her collaboration with Puma: tracksuits, sports bras, leggings and pleated cheerleader skirts that were covered in graphic tribal prints and Puma sneakers embellished with Swarovski crystals and beads.

The next group was the messenger group, which she referred to as her Jahnkoy army that’s sent to inform the world about lost cultural traditions. This group also wore Puma active pieces including sweatpants and basketball jerseys that featured heavy beaded embellishments.

For the last section, she modeled the performance after a Soviet Union parade. The dancers wore mostly traditional Russian outfits, which Jahnkoy said is the last piece of customary dress that Russia has and it’s typically worn as a costume. During this set the designer herself came out walking slowly down the runway shaking a beaded instrument as if to restore order.

Jahnkoy has the ability to enhance and energize active clothes, but as vibrant as the garments were, they seemed secondary to the theatrics, which might have been the point. And now three seasons in, some slight shifts in aesthetic would be welcome. Her efforts to revive and preserve traditional craftsmanship are commendable, but in the age of transparency it would be nice to see how much these craftspeople are being paid for their efforts and how this is improving their quality of life.