The designer wants to expand the boundaries of men's wear. 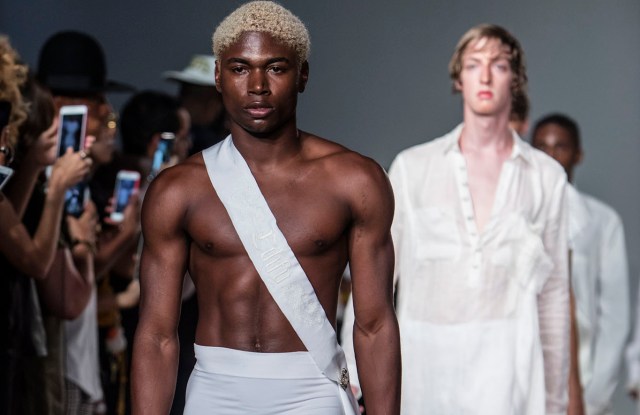 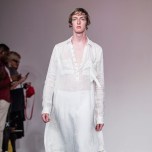 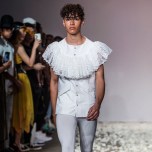 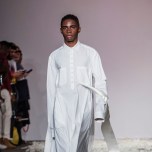 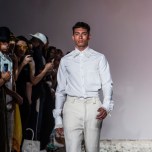 Kenneth Nicholson pulls from a varied bag of interests. The Houston native is as motivated by 18th-century dress as he is by outfits from “Soul Train” and military uniforms — after attending the Academy of Art in San Francisco, Nicholson spent a one-year stint in the Navy before he was honorably discharged. But his overall interest is in expanding the boundaries of men’s wear.

“Historically, men haven’t been restricted to just a shirt and pants. They’ve had more options,” Nicholson said. “I like to edify people and shake things up.”

He divided his collection into three chapters. The first chapter was a stark white, which Nicholson said was void of color to express sadness. Models wore cotton and linen long-sleeved shirtdresses with subtle swing hems, white lace shirts paired with cream high-waisted pants, and a brocade jacket with an exaggerated lapel coupled with a matching skirt. References to royalty were sprinkled throughout the lineup. Some models wore sashes, others wore crowns and a couple of the more structured, beaded looks with mock necks, nipped waists and peplums, which were highlights from the collection, brought to mind regalness.

The second chapter, which signaled better memories and featured more color, was the strongest. Nicholson doubled down on the Seventies references and presented wallpaper striped shirts and shorts, a blouse with ruffled sleeves and a tuxedo placket placed on its back, and denim shirts and trenchcoats decorated with rhinestone buttons and doily fabric.

The last chapter was the funeral, which adhered to a black color palette and evening appropriate fabrics. Looks included a black swing coat worn with a long skirt, a velvet shirt adorned with lace ruffles and cropped pants with satin bow details, and a black shirt with a high lace collar. Nicholson is developing a nice vocabulary as a new designer and it will be interesting to see how he evolves.