This all-girl collective from Amsterdam imagined Planet Re-4 and designed for the fictional characters who live there. 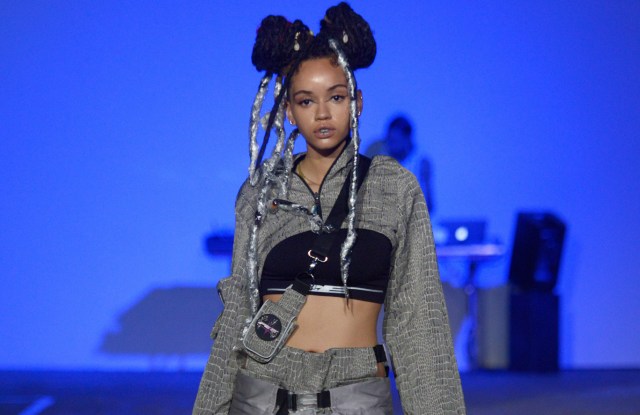 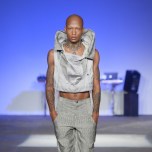 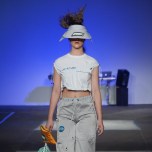 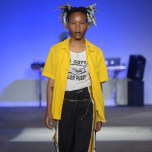 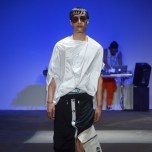 Reconstruct Collective, consisting of five female designers, began out of necessity. After learning that the Willem de Kooning Academy wasn’t able to put on a fashion show for its graduating class, students banded together to organize their own show. And in order to raise money for the show, they needed to form a business with the chamber of commerce. Because they worked so well together, Laura Aanen, Alyssa Groeneveld, Kim Kivits, Michelle Lievaart and Sanne Verkleij decided to start a collective shortly after graduating. Now three collections in, the Amsterdam-based company opted to show in New York, which Groeneveld said made sense for the brand, which caters to the youth.

For spring the unisex line was based on a fictional place called Planet Re-4 and the fictional characters that live there. The lineup, which Groeneveld said falls between streetwear and couture, was made up of reconstructions of sporty pieces. They presented cropped bubble vests and matching miniskirts, wide-leg nylon pants decorated with multiple drawstrings or reflective material, cropped tank tops with the Re-4 logo and jackets made from strips of fabric. The waistbands displayed a graphic Reconstruct logo. They also reconfigured Converse tracksuits and pieces from The New Originals, an Amsterdam-based brand.

Groeneveld said working with four other women is actually quite seamless because they each bring different strengths to the table, and the collection reflected that while still presenting one unified vision.