Olivier Rousteing laid his heart bare with a collection about his childhood obsessions — Michael Jackson and the American dream, Serge Gainsbourg and French style. 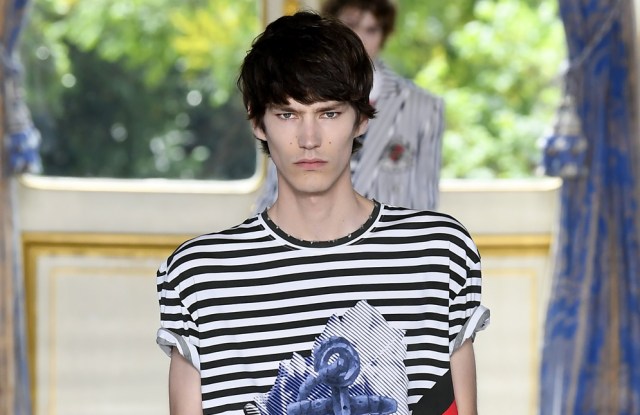 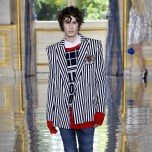 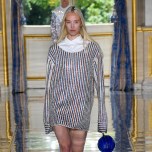 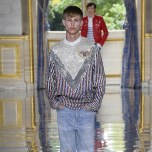 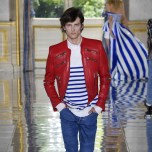 Olivier Rousteing laid his heart bare with a collection about his childhood obsessions — Michael Jackson and the American dream, Serge Gainsbourg and French style. He also trumpeted diversity in men’s wear and that message came through loud and clear: The collection was 80 looks long, and included a small capsule of shimmery and striped styles from the Women’s Episode Collection, a new runway companion for the men’s.

The collection, which Rousteing described as “Serge Gainsbourg and Michael Jackson having a talk,” and “preppy goes crazy,” also reflected a new strategy at the house. Earlier this year, Balmain’s new chief executive officer Massimo Piombini said his aim is to move the brand on and broaden the men’s wear offer to include new, more relaxed fits and more denim, jersey and knitwear. Hence the long black cotton hoodies with prints inspired by Jackson’s “Dangerous” cover art and the oversized — and surprisingly subdued — striped red sweater that Rousteing wore to take his bow.

While Rousteing’s men might be a diverse bunch, they’re certainly united in their love of flash: A blizzard of sequins — red, white, silver black and blue — rained down, glistening on drummer boy tops, shrunken Jackson-style military jackets, a varsity jacket with a B on the front and long, ice hockey style shirts with Balmain lettering.

Strands of tiny crystals hung like ragged strings from distressed denim jeans and jackets while skirt suits and boots were paved with small silver mosaic-style tiles. Long silver foil shirts and crinkly trousers and long shimmery bathrobe sweaters dialed up the brightness — was that even possible? — of the gold-mirrored catwalk. The gilded venue with its crystal chandeliers — France’s Ministry of Foreign Affairs, which until Sunday had not played host to a fashion event since the days of Oscar de la Renta at Balmain — was easily outshone by all of Rousteing’s bling.

That wasn’t all: Rousteing’s love of bad boy Gainsbourg shone through in sparkly Breton tops, some with big anchors on the front, and similarly striped trousers that narrowed at the ankle.

Rousteing said before the show that he’s designing around timelessness rather than trends, and that he refuses to reduce men’s wear to “one kind of guy, not straight or gay, not young or older, not skinny or fat. The message is, ‘Be yourself.’” The house’s clientele — which includes Cristiano Ronaldo and John Legend, Kanye West and Zayn Malik — reflects that. Rousteing said he was at the Met Ball this year “talking to J. Lo’s boyfriend [A-Rod]” who said he liked the collection. He recalled talking to Justin Bieber a few years earlier, and the singer had similar things to say.

The bling thing might not be for every man, but it was clear on Sunday that Rousteing is looking to be more inclusive, and his tune was a sweet one.