Kris Van Assche set the template for his new-look Berluti with a first collection quietly presented in Paris this week. 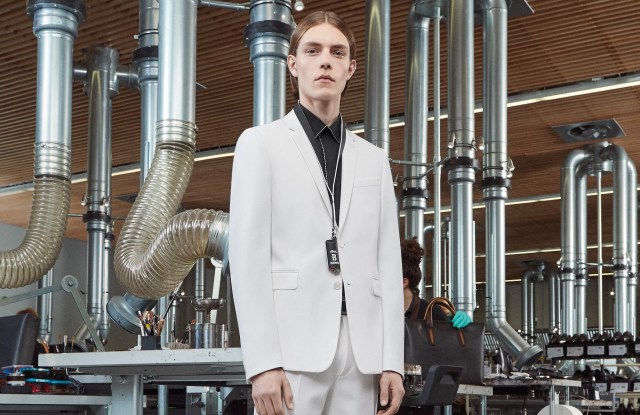 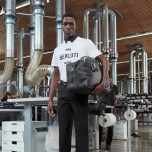 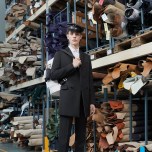 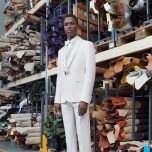 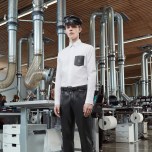 While fellow designers Kim Jones at Dior and Virgil Abloh at Louis Vuitton were making splashy runway debuts in June, Kris Van Assche was quietly unveiling his first collection for Berluti to buyers in showroom appointments.

Editors discovered the collection this week, when it was presented in a temporary glass-walled pavilion designed by Jean Prouvé, set up on the Place de la Concorde in Paris to coincide with the FIAC contemporary art fair.

Designed as a prologue to his first runway show, scheduled for January, the capsule line reflected the mix of tailoring and sportswear that has been a trademark of Van Assche’s previous work, both at Dior men’s and for his own label.

Cropped-leg suits and white shirts, some with black leather patches, rubbed shoulders with smart cashmere blousons and hoodies, including one in paper-thin red lamb leather.

Van Assche used the Scritto, an 18th-century manuscript motif that normally appears on Berluti shoes, in a variety of guises: as a graphic black print on a white T-shirt, a multicolored pattern on a black shirt, or tone-on-tone jacquard accents on a cream tuxedo.

The house’s trademark patina appeared as a blue and red colorway deployed across clothing — such as a cashmere and silk crewneck sweater — and accessories, including a glossy black alligator briefcase.

It marked a departure from the sleek, androgynous creations of his predecessor Haider Ackermann, signaling that luxury houses continue to court a more casual customer. There was even some logo merch: Van Assche deployed his new visual identity for the label as a leather appliqué motif on a sweatshirt and bomber jacket.

It made for a smart, commercial offering, even if it lacked the sizzle of either his two LVMH peers or the scrappy upstarts that are rewriting the men’s wear book. Celebrities including Rami Malek, A$AP Rocky and Ricky Martin have adopted Van Assche’s first Berluti designs, and no doubt he will aim to make even more converts next year.