Kim Jones celebrated his debut for the French house with a celebrity-filled audience and a monumental flower sculpture by U.S. artist Kaws. 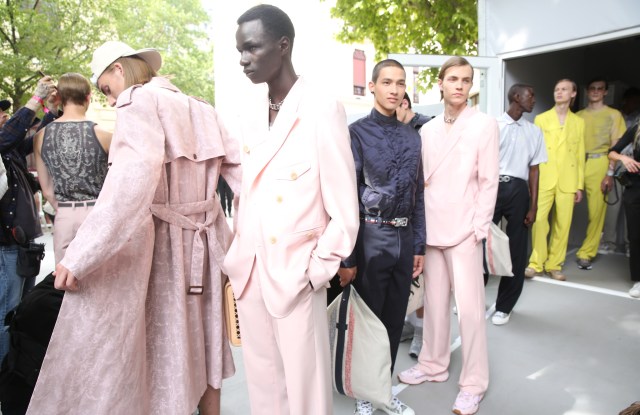 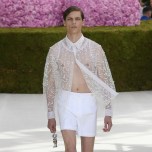 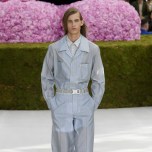 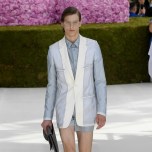 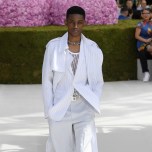 Welcome to the Fashion Olympics! Or so proclaimed the arena-like venue for Kim Jones’ debut show for Dior Homme.

Towering over the rotunda, set up in the barracks of the Republican Guard cavalry regiment, was a 33-foot-tall sculpture by U.S. artist Kaws representing founder Christian Dior, made up of 70,000 flowers, and his dog Bobby.

In fact, there were so many VIPs in attendance, the house struggled to accommodate editors in the front row. By the time Underworld’s “Born Slippy” boomed out of the speakers, the scene had been set with conquering efficiency.

In a preview of the collection, Jones said he mined the Dior archives for inspiration linked to the two facets of the house: the myth, as epitomized by its women’s couture heritage, and the man, known for his love of flowers, interior design and his dogs, as well as his close friendships with artists and writers.

“It is a dual tribute — to the reality of Dior, and the fantasy,” he said in his show notes.

To begin with, a dose of reality: a crisp white suit spliced with panels of striped lining fabric, modeled by Prince Nikolai of Denmark. The fantasy part came straight after, courtesy of a gossamer white shirt with a toile de Jouy pattern, rendered in white feathers on tulle.

Contrary to what his initial premise suggested, Jones didn’t stray too far from his signature sportswear-infused aesthetic. The embellishment — from the toile de Jouy motif, this time in print form, to the floral patterns inspired by Dior’s personal porcelain — was used in controlled bursts.

The feminine influence could be felt most keenly in the color palette, heavy on tennis whites and the house’s signature pink and gray, and the gentle tailoring. Campbell wore the season’s signature jacket, the Tailleur Oblique, demonstrating the style works just as well for women as for men.

“People just want to be more comfortable, I think. It’s not so uptight and upright anymore,” explained Jones.

Most strikingly, he found myriad ways to turn the house codes into covetable merch: male versions of its best-selling Saddle bag, available in cross-body, backpack and belt-bag styles; leather coats and jackets laser-cut into its signature cannage pattern, echoed on tote and weekender bags, and casual footwear, including basketball shoes featuring the Oblique pattern overlaid with clear plastic.

For the streetwear connoisseur, there were belts with a stylized CD belt buckle created by Matthew Williams, the designer behind the rising label Alyx, and graphic jewels by Ambush creative director Yoon Ahn, who recently joined the Dior team, based on a modernist logo used by Dior’s family in the Twenties.

Denim pieces embroidered with the Dior bee, as reimagined by Kaws — aka Brian Donnelly — will drop in stores in December as a taster for the spring collection.

French poet Jean Cocteau once called Dior “this agile genius of our times whose magical name contains dieu [god] and or [gold].” With his monumental floral offering, Jones appeared to invoke the house’s founder in Spirit God form. No doubt, the gold will soon follow.