Mark Weston used silk moiré, leather outerwear and mohair suiting in a sure but subtle subversion of luxury codes. 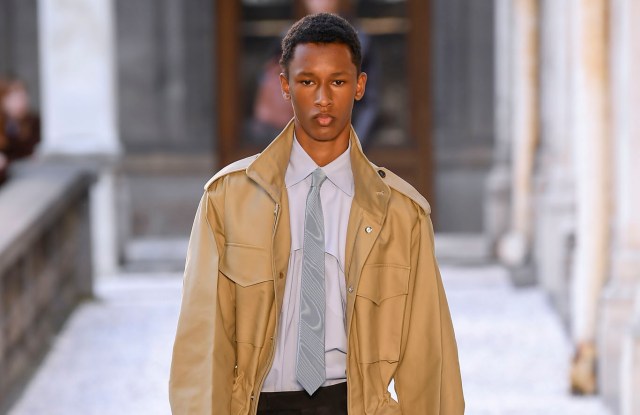 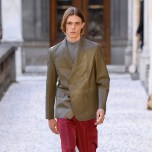 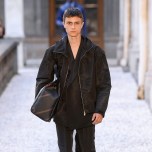 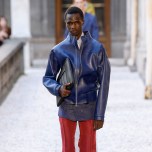 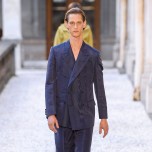 Mark Weston had his eye on silhouettes for his second installment of the Dunhill reboot, offering split-hem trousers and an abundance of rich, leather outerwear. Charged with reigniting a brand that has struggled over the years to find the right register, Weston went for a subtle subversion of luxury codes.

He thought about taste and aspiration this season.

“I was looking at the languages of the diversity of British culture, some of its high culture and some of its low — I love how things kind of contradict each other,” he said backstage before the show.

He relished this tension, taking the high — noble fabrics associated with eveningwear like silk moiré — which he refashioned to look something like nylon used for sportswear, or to build a vest cut like a leather biker top. In another instance, a smoky pattern from the precious stone on a lighter, pulled from house archives, was applied to a loose windbreaker.

The designer sent his models down a column-lined runway at a fast clip, crumbling mosaics underfoot. The first one wore a double-breasted suit jacket, a continuation of the previous season, that hangs like a navy blazer, buttons largely invisible, no shirt underneath. With movement, the front fold flapped open to show a flash of gold buttons inside.

Leather was elaborate, diverse and colorful, including mustard yellow, olive and blue; encompassing a range of bombers, shirts, vests and trenchcoats. For suits, he turned to mohair suiting for precise tailoring.

Split-hem trousers came in two shapes — ultrathin or looser, the way jeans were worn in places like Manchester in the Eighties.

Weston also toyed with necklines, sending out a number of jackets without their shirts. Throwing a yellow bomber jacket over a pale blue silk moiré suit jacket in one shirtless look, he completed the outfit with blue, split seam trousers — the looser cut — and a new stacked heel leather loafer.

“New!” and “Young!” were key terms of the mandate set out by executives of Dunhill owner Compagnie Financière Richemont.

His response was unstuffy, chic and irreverent.