The design trio celebrated American classics, pressing them into their disciplined universe with handsome results. 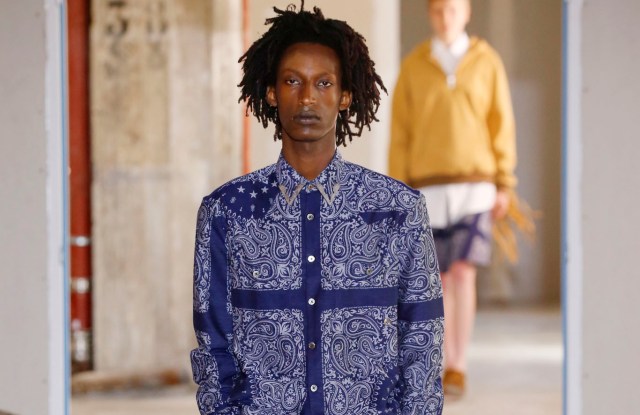 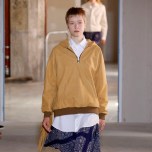 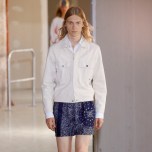 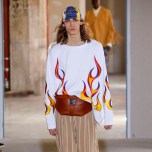 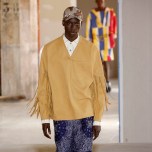 For their coed spring collection, the design trio of Études turned to the West, borrowing elements of all-American classics like bandanna patterns, suede fringes, camouflage and car tuning flames. But that was not all. The celebration of American diversity included hip-hop, bringing back colorful designs from Karl Kani in the Nineties — the collaboration revealed by the designer’s signature overlaid on the Études label on the front of a loose pullover top in blue, yellow, pink and white. Other references: a hockey shirt, super sized and partially tucked in, and utility overalls, hickory stripes, hammer loops and all.

Sounds like a lot going on, but pressed into the label’s disciplined universe, the resulting lineup was smart, urban and for the most part, very interesting.

In a nod to Mexico, traditional rainbow color blends, running horizontally, were paired with loose, tailored pinstriped trousers for the men, and a long, knit dress for women. Vibrant portrait paintings from L.A.-based Henry Taylor transferred well to a silk shirt, becoming a compelling fabric pattern.

Logos, which the brand does not shy away from, were fairly few and far between this season, spelled out in white stitching on a jean shirt in a repeating pattern in one case.