The Israeli designer Hed Mayner chose a youth center as the backdrop for this collection that was all about plays on proportion and blurring lines. 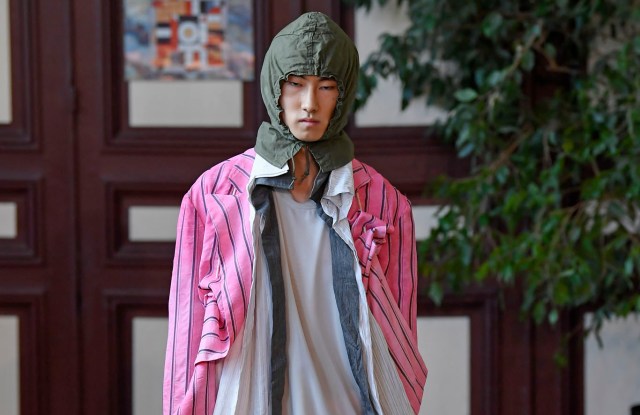 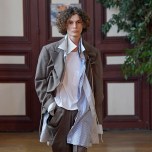 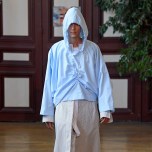 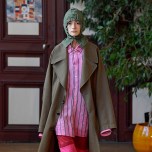 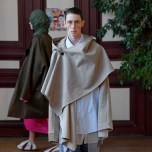 Israeli designer Hed Mayner chose a youth center as the backdrop for this collection, which was all about plays on proportion and blurring lines. Slim, androgynous models, many with long, flowing hair, swept across the tiled floors dressed like monks in robes or cavemen covered in skins. Some had feet that were dyed blue while others wore little fabric or leather drawstring bags over their shoes.

The collection was built on layering — and more layering — and volume: Shirts — some of which looked like dresses — were worn over roomy trousers and under big jackets. One tailored cream jacket had comically long sleeves, while blankets doubled as capes and were pinned across models’ chests. Other looks came from layers and layers of shirting wrapped, tied and shaped into dresses with fitted waists.

Mayner said he wanted to conjure an idea of fabrics “falling straight down in a linear way” and said the layering was “random” and meant to blur the silhouette “and avoid a perception of pattern.” Oversize sleeveless, perforated shirts were meant to show light going through the body.

The designer’s ideas were interesting, but at the end of the day it’s hard to wear an idea, unless you’re one of those people who pose for photographers on the street during fashion weeks. Mayner can philosophize as much as he wants, but in the meantime, he needs to clean up his silhouettes and make some clothing that people can actually wear.