Simon Porte Jacquemus unveiled his men’s line on a secluded beach near Marseille, the perfect setting for the line's southern preppy flavor. 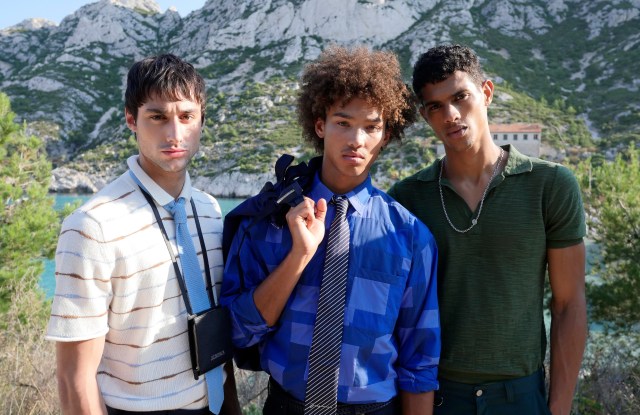 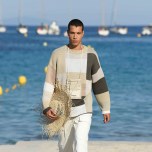 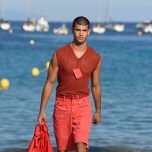 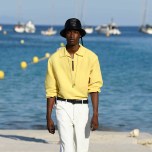 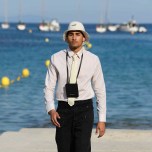 MARSEILLE, France — “I don’t think there’s this Mediterranean boy in the market, with a [sunny] energy like this,” said Simon Porte Jacquemus of his new men’s line, presented Monday on a secluded beach here in one of the hidden bays of the Calanques, the term for the rocky inlets around Marseille and nearby Cassis.

“It’s like a [mini] vacation in the Jacquemus world,” added the designer, who himself took a dip before the show.

A select group of editors took planes, trains and automobiles to attend the event, which fell a day after Europe’s men’s season officially wrapped.

Minibuses whisked them along the coast to the remote location, entering a private park and winding down a steep narrow path to a soundtrack of cicadas, with the occasional gridlock. (This was “rush hour” for the natives, who were leaving the beach after a hard day’s work soaking up the rays.)

Rows of blue towels had been laid out for editors on the beach as seating for the sandy runway on the water’s edge, with people bobbing in the water.

“Swimmers, move along. Sorry to interrupt your bathing,” bellowed a woman on a Tannoy, with one bronzed beefcake protesting: “You want to throw me off my own beach?”

Meanwhile, the show guests were taking turns trying on a supersize La Bomba sun hat being passed around. Pascale Mussard and Jean-Jacques Picard were among the crowd.

The sound of the lapping waves was interrupted by the buzz of what looked like a giant mosquito, as a drone whizzed into view. And then, walking along a wooden plank that led to the beach, out came “Le Gadjo” — local speak for “guy” or “boy,” which Jacquemus titled the collection.

So what was he like? A contemporary Frenchman from the South, very masculine, with his chunky gold chains — and certainly not a fashion victim.

Knitwear was a major focus of his wardrobe, which had a bit of an Eighties feel, from superfine striped polos to slouchy, color-blocked, chunky sweaters — one worn with swim briefs — and old-school knitted ties, with the texture echoed in braided belts.

The palette covered all the blues of the sea and all the shades of the sun.

Riffing on local style, the designer opened with a light turquoise zipped jacket and straight pant falling somewhere between a track pant and a summer pant, a matching hanging wallet slung at the neck.

He also sprinkled in some tongue-in-cheek southern clichés, like the sunflower and wheat prints developed in-house, with the latter revisited in the jewelry.

Worn unbuttoned, a shirt in an orange-and-yellow print with more of a tropical feel had a Henri Matisse look to it, while an outfit in a blue striped cotton canvas brought to mind parasols and sun beds.

A fisherman’s tunic in canvas was revisited in lightweight cotton versions with Jacquemus’ autograph embroidered on the chest. A formal grayish-green suit with a simple two-button jacket was paired with a Bermuda short in the same cloth, and the washed cotton canvas shorts or rolled-up pants had a bit of a cargo feel.

The ultimate message was a relaxed, preppy, Mediterranean wardrobe for “real” guys, which is what Jacquemus, who paid close attention to the prices of the pieces, seems to be targeting.

In terms of show production, the most perfect golden light and backdrop came courtesy of Mother Nature, which as far as powerful branding exercises go, is pretty spectacular. Even the pastis (Ricard) and ice creams (Emki Pop) were sponsored, but the designer has been a shrewd marketer from the get-go with his way of bottling, and selling, the South of France way of life. And who doesn’t want a bit of that?