Pierre Mahéo hit his stride with a coed lineup of chic and individual clothing for the young and fashion-conscious. 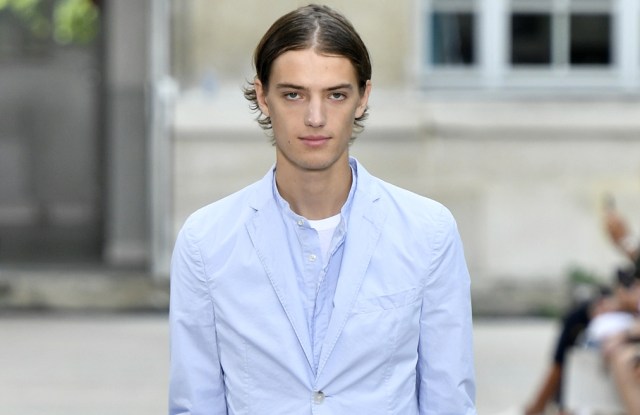 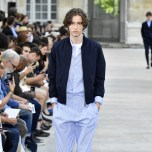 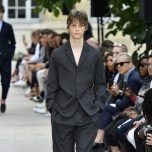 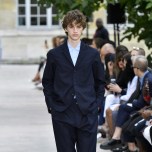 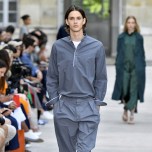 It’s uplifting when someone hits his stride — Pierre Mahéo is in a good place. The designer took Officine Générale to a wide sandstone terrace of a historic Paris building for his coed spring show, a fresh lineup of chic and individual clothing for a fashion-conscious consumer. It felt younger this season.

Light suits came in the palest blues and khakis or a bright navy blue. Outerwear included a trim motorcycle jacket, a rain poncho with short and wide sleeves and a thin, quilted bomber and a zip-up jean jacket. There were luxurious suedes, as well, in dusty plum or a muddy emerald-green.

Prints were new, an endeavor he had renounced last season because none felt right. These did, refreshing but not overbearing: rows of white o’s on a dark backdrop or white stylized carnations, with jagged-edge petals, set against a pale plum.

Adding to the star-alignment flavor of the moment was pristine weather and a bucolic setting—the garden below at the height of its season, fountain running.

Weather is luck of the draw. Diligence was another ingredient, seen in the razor-sharp focus on fabrics. Japanese silk seersucker, Italian poplin and “crazy ribstop” got mentions in the show notes, along with a tongue-in-cheek apology for the distraction before listing what he’s thankful for. Mahéo packages messages as a note to friends; here he mentioned buying mountains of croissants for his family on weekends and the freedom of designing against the trend without suffering commercially. Store openings, too — three in ten months, including a shop for women on Rue du Dragon in Paris.

Life wasn’t always this good, he noted; of this he remains conscious.

“It’s a form of therapy, when things were a bit difficult but now, suddenly you do this and it takes off and it works…it’s comforting,” he concluded, after the show.