Alejandro Gómez was inspired by a cabinet of curiosities for his show, held at the Museum of Natural Sciences in Madrid. 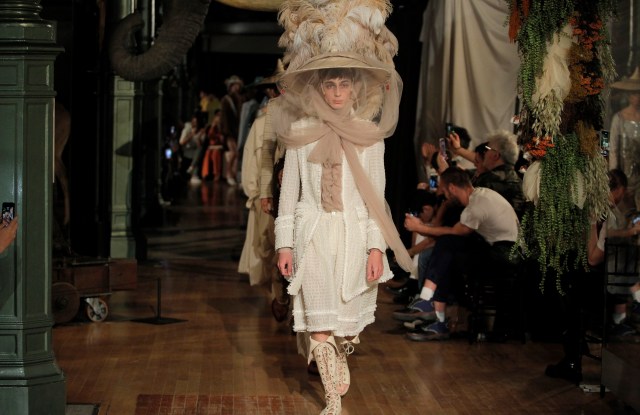 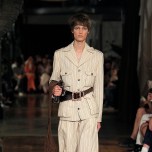 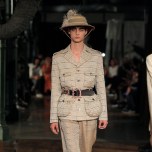 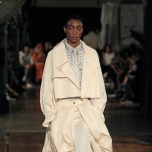 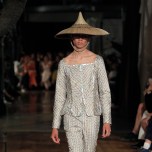 You could argue that at its essence, the best closet is like a cabinet of curiosities, filled with carefully collected pieces from around the world. With his spring collection focused on that theme, Alejandro Gómez Palomo took viewers on a dreamy and dramatic journey that spanned Seventies airport glam to the far reaches of the globe.

The show, held at the Museum of Natural Sciences in Madrid, also allowed the designer to catch his breath after the whirlwind following his January showing at Paris Fashion Week, where he plans to return next year to stage a collection big enough to stand out among the power players.

Using a palette of neutrals with pops of jewel tones and summery outfits in relaxed fabrics, the lineup represented a move away from the darker and heavier pieces of past collections.

“It’s the same boy that we’ve portrayed [in the past] but now he’s coming from this trip around the world, or since he’s a dreamer, his own mind. He’s collecting the weirdest things and attracted to all the beauty that Planet Earth has to offer,” Palomo said.

The looks were playfully androgynous with suggestive twists to traditional silhouettes and fabrics, like the powder blue trench coat with a dramatically voluminous skirt or the ultra-short shorts in brocaded fabric. Moments of high drama came via a feathered turquoise balaclava, or a sheer jumpsuit dripping with strings of black beads.

Kurtas edged in tortoiseshell buttons came with puffy sleeves. Spanish flamenco dancers got a nod with a series of triangular cropped capes edged in long fringe. Even clerical cassocks were infused with a dreamy imagination that was hard to place.

They say no one is a prophet in his own country, but with this eclectic and beautifully executed show, Palomo had the home crowd cheering.