Thom Browne tumbled down the rabbit hole and through the looking glass into his own surreal world filled with the preppy motifs of his American youth. 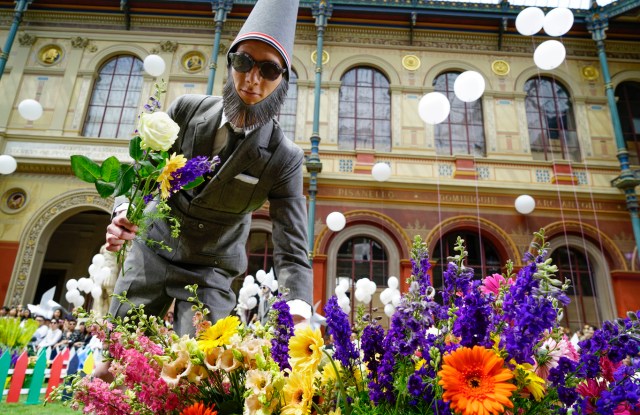 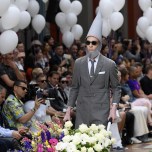 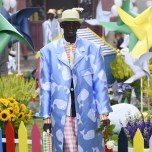 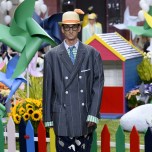 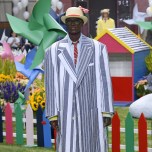 Thom Browne tumbled down the rabbit hole and slipped through the looking glass into his own surreal world filled with the preppy motifs of his American youth — chubby wales, lobsters and toy sailboats — and a mix of shrunken and supersized proportions of the Alice in Wonderland variety.

“… Please see the world through my eyes…please…,” said Browne in his show notes, which came with a big tutti frutti lollipop swirl and a pair of yellow-tinted glasses. Okay, Thom, if you say so.

The backdrop to this kooky — and often charming — show was a garden with a little picket fence, big pinwheels and meandering gnomes in oversized gray shortalls and tucked-in blazers. The soundtrack took in trippy David Bowie tunes and a version of the Seventies kids’ classic “Free to be You and Me,” driving home the big theme of diversity and tolerance.

Gnomes mowed the lawn and worked the wheelbarrow in their cone hats and matching beards as models walked in agonizingly slow motion around the greenery, wearing clothing that was either too big or too small: Extreme plays on proportion have always been Browne’s thing.

Indeed, there were big and small versions of just about everything, including a nice mint blazer with white piping, and corduroy jackets and trousers in red, white, pink or green. They were covered in preppy nautical motifs — embroidered or picked out in pearls — that came straight from Mummy’s Eighties closet at the house in Nantucket. Well, maybe not the shorts with the little red crab placed strategically at the front.

There was gingham galore, as in big checks on a fur coat, or magnified ones across an oversized cotton one, and seersucker and stripes had their moment, too, on jackets long and short.

A long khaki colored coat festooned with giant colored lobsters and fit for a man the size of Hercules was the final exit before models, walking side by side, did a final lap to Sharon Jones and The Dap-Kings singing “This Land Is Your Land.” Some of them held hands.

Browne said his aim was to take those preppy motifs and “throw them into the wind,” and added that the clothes are being sold “as is,” and not re-proportioned for the shop floor. “I was playing with proportion and wanted to take the collection back to where it all started — and show where it’s going.”

The designer has conjured his all-embracing world. Now it’s up to the customer to gaze at it through yellow-tinted glasses and decide which version of Browne’s man they’d like to be.