Heading to Shanghai, Miuccia Prada showed a collection that was about youthful classics done with new proportions. 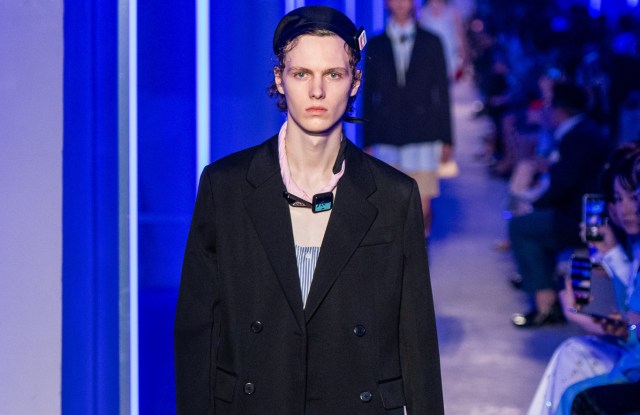 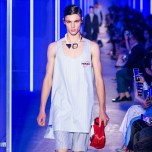 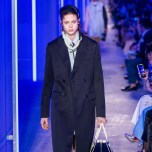 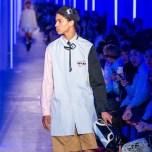 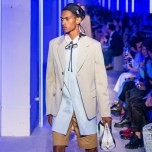 The 80,000-ton warehouse that is the Minsheng Wharf in Shanghai was bathed in a blue light and an Eighties synth-filled soundscape was beating when Prada’s new China ambassador, the singer Cai Xukun, swaggered into the space, the last to claim his show seat.

It was only a few days ago that the Italian house had revealed the 20-year-old pop star as its first China spokesperson. Prada has been slower than others on the embrace of Gen Z famous faces, but the company seemed to be making up for lost time with laser-like focus with the appointment of Cai and an elaborate men’s event in Shanghai on Thursday night for the presentation of the brand’s spring 2020 collection, skipping Milan Fashion Week to do so.

Miuccia Prada’s collection itself was about youthful classics done with new proportions. Shirts had roomy pockets and pouches, the shoes were chunky, and a few looks had the models wearing long untucked polo shirts under light blazers. Continuing the Eighties vibe, symbols of lo-fi and outmoded tech such as cassette tapes and chunky video cameras featured as patches or prints. The palette ran from a mix of color-blocked pastels against khaki and black.

Postshow, the music artist Frank Ocean and Cai both headed to greet Miuccia Prada. Cai had just finished his first North American tour and was just about to turn his attention back to planning concerts in China toward the end of the year.

“The whole tour was amazing. I got to meet all the fans around the world,” Cai said.

Might Prada work with a celebrity face in China for women’s soon to further its renewed push? A quick browse at the front row showed actresses Deng Enxi, Zeng Meihuizi and Guan Xiaotong, among others.

“We have so many already, I don’t know,” said Prada. “It’s a subject that is under discussion.”

The designer was happy to share her first memories of China, however.

“I was 25 years old, in the late Seventies,” she said. “The difference, of course, is huge. Now it’s so modern but it’s so funny, when you go back to Italy, it’s like you go back to medieval times.”

The crowd then settled into dinner, which was an immersive experience of sorts. Throughout the meal, performers appeared unannounced. Seven acts, including contortionists, dancers who played with mirrored reflections and light, and the two-time Grammy-Award-winning Dana Leong on the electric cello took the stages around the hall, before finally, Craig Richards and Ben UFO closed out the evening in the club space.