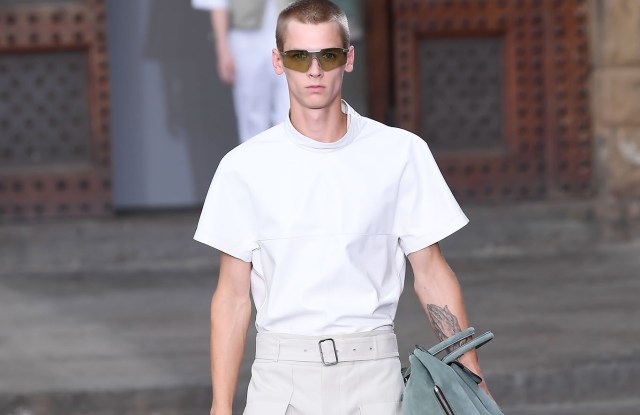 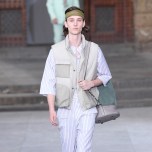 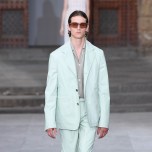 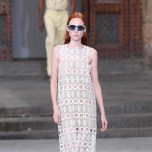 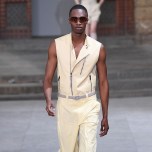 Having Palazzo Vecchio as the backdrop of a runway show is a privilege that only a quintessential Florentine brand such as Salvatore Ferragamo with a long history in this Tuscan city could hope to pull off. Of course such an incredible backdrop might have become a bit overwhelming with a weak collection. But that wasn’t the case for the lineup creative director Paul Andrew showed on Tuesday night.

The antique beauty of the Piazza della Signoria square actually created a charming contrast to the slightly futuristic take on the utilitarian aesthetic injected into the collection. Salvatore Ferragamo’s incredible craftsmanship and heritage stood out, but in a new version, never nostalgic or retro, but projected into the future. The high-tech approach to the treatment of materials, including leather which was embossed and then waxed for a glossy effect, as well a certain sharpness in the cuts, conveyed a look that felt very modern and cool yet never cold or too minimal. Accessories helped put the focus on the duality of the lineup: while the sailing bags and the leather sandals exuded classic elegance, the multipocket bags and chunky boots offered the most functional and cutting-edge essence of Andrew’s fashion proposal for spring.

The sophisticated color palette, including deep tones of orange and purple, bold light blue and lilac, juxtaposed with neutrals, enhanced the chic appeal of the collection. A sense of lightness permeated the constructions, which featured urban staples such as parkas, padded vests, utility pants and jumpsuits, mixed and matched in a way that offered an appealing urban option for hip — and rich — kids tired of streetwear. However, Andrew wanted to exalt the ageless versatility of the lineup by bringing to the catwalk a diverse cast, including Peter Saville, Hero Fiennes, Josh Lucas and Michael Berger.

While the designer mainly played with solids, he also developed a print reproducing Piazza della Signoria’s Fountain of Neptune — a lively trait d’union between the clothes and the show’s prestigious location.