Samuel Ross did a lot of reevaluating for his latest outing. 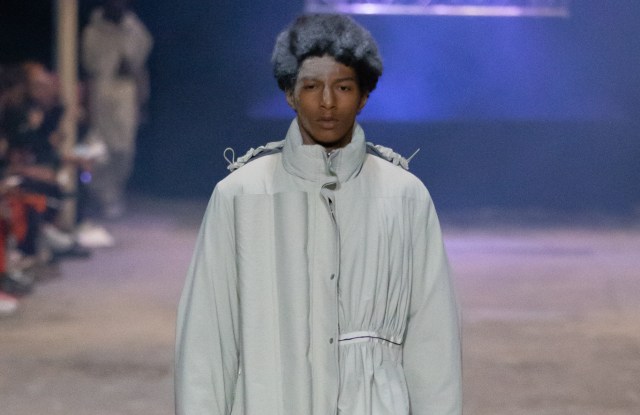 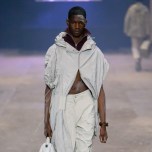 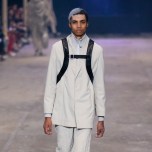 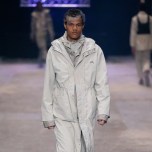 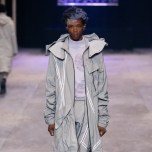 A-Cold-Wall, like many of its counterparts in the New Guard Group, became really buzzy, really quickly — as evidenced in the swarms of guests who marched to the rave club Printworks in the far end of East London on Monday morning, despite the heavy rain showers.

But Samuel Ross is ready to take a moment to reevaluate — and give back.

That’s why he opened his spring 2020 show to the public, inviting in students from Central Saint Martins and Architectural Association School of Architecture to encourage a “circular form of communication” between brand and consumer. He also offered his Newgen grant to the up-and-comer Eastwood Danso.

There was some reevaluating done with the clothes themselves, as well, to good effect: Ross offered a more serene, pared-back lineup referencing “foundational compounds” like clay, lead, glass and water.

Cue earth-toned tracksuits and light, ruched sweaters that had a softer feel than previous collections; vinyl trenchcoats in deep shades of blue that created a striking, liquid effect and outerwear in abstract, tie-dye patterns pulled in with cords to hug the body — and mirror the malleable qualities of clay.

Ross also added a heftier dose of tailoring to the mix and played with texture, mixing technical fabrics like nylon with more traditional ones like wool, on blazers and smart, tailored coats.

Elsewhere, there were more familiar products that make up the fail-safe streetwear recipe: loose track pants and matching sweaters, bombers and harnesses. Nothing new here, but the result was cool and inspired a tribal, cultish feeling that’s often associated with the streetwear crowd.

And the tribe is only about to get bigger according to the ambitious Ross, who pointed to size of his chosen venue, a former printing factory, as “a nod to the level of magnitude, the growth and direction of the brand.”