Crutchley melded an array of references to create a strong, theatrical moment with glamorous yet fuss-free pieces. 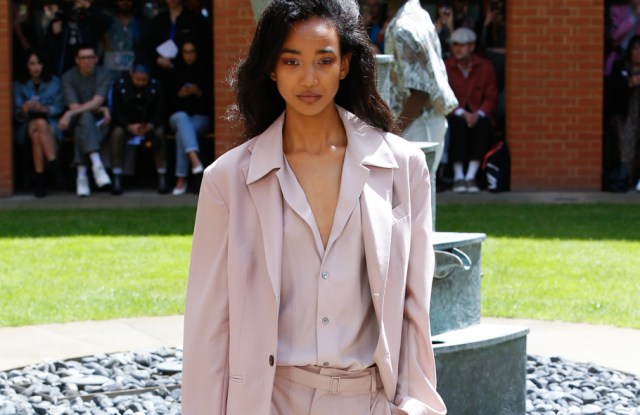 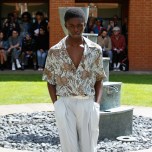 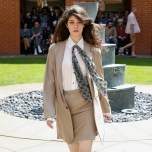 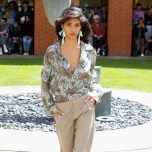 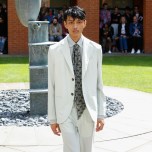 Edward Crutchley transported his audience to another world with his spring 2020 co-ed show, which was all about the glamour and grandeur of times past.

There were tinges of nostalgia with references of a bourgeois Britain in the Eighties and early Nineties — seen in the abundance of pretty Laura Ashley-esque florals or to references of the 1969 Ikea advert “Chuck out your chintz.”

“In Europe, at the moment, we have a real cultural problem with nostalgia. We hung on to it, and I think Brexit or the rise of the right in general is about that longing. So it was interesting to think about why we’re nostalgic and specifically look at that time in the early Nineties in Britain, before it was a cool place, when it was all about that chintz, floral, tweed, bourgeois-ness,” said Crutchley backstage.

Elsewhere the abundance of bows on the shoulders of dresses or on satin brogues, complete with operatic music in the background — produced by Michel Gaubert — brought to mind French court dress, while the sense of ease on a series of Hawaiian shirts and pastel-hued loosely tailored suits, added a contemporary edge.

While Crutchley moved through an array of references, his message remained consistent: Great-looking, easygoing clothes that can translate as well on the shop floor as they did on the garden of the Haberdashers’ Hall in East London, where his show took place.

Since launching his label three years ago, he has proved his commercial acumen and ability to quickly expand his scope well beyond the printed textiles for which he first became known.

Here, he sprinkled signature prints on silk shirts or jacquard dresses which featured hand-painted illustrations of parrots and vivid florals, respectively. But his ability to play with volume, rich color and draping equally stood out. Among the highlights were dramatic taffeta capes, sleek cigarette pants and balloon-sleeve dresses worn with large “Sunday best” taffeta headpieces by Stephen Jones.

“I wanted it to feel expensive, rich, very contemporary. You can still have comfort but be incredibly chic, that’s where you can play with volume and fit and drape,” added the designer.