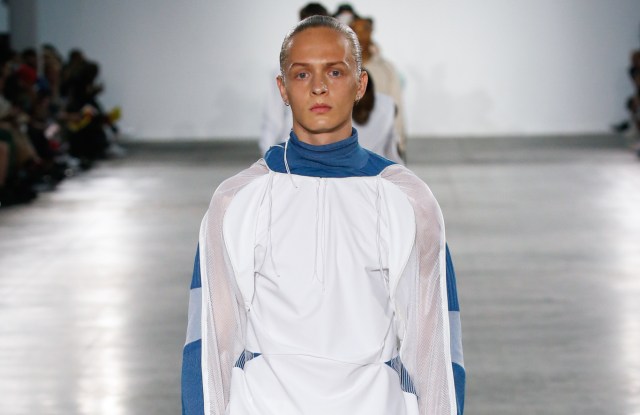 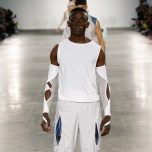 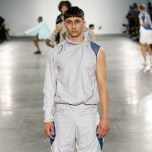 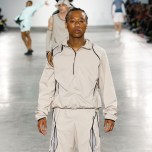 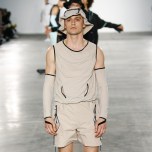 Nash made a strong debut. Models were already standing on the runway swaying slowly to the music as guests entered the show space. Dressed in technical performance wear pieces such as white running vests, steel gray nylon pants and cyan blue tracksuits, the models started to dance down the runway. The interpretive dance managed to show the intricacies of Nash’s pieces. Zippered vents that ran down pant legs and sleeves and the paneled construction of his garments showed their purpose, as it allowed for his models to move freely.

Lynch also kept it casual yet spiced it up with a retro vibe. She colored her tonal loungewear looks in pastel colors such as mint green, lilac and cornflower blue. “This carefree nature is something that I’m always drawn to,” the designer said in the show notes. Lynch’s carefree nature expressed itself through hybrid cable knit sweaters with rip-stop nylon patches and terry cloth short shorts and cropped sweat pants which featured double waistbands.

Last season Mowalola explored eroticism and sexuality and this time the designer wanted to examine the intricacies of love, especially the “horrific feeling of love,” which manifested into gunshot wounds and large lip prints.

Although her looks and the theme matured, the designer still showed plenty of skin. A thonged bodice left little to the imagination alongside a model whose breasts were on full display. However, she managed to keep intrigue with leather backless apron-style tops and tank tops with the sides cut out. She spaced out these sexy leather looks with neon green cowhide jackets and trousers and beautifully tailored coats.