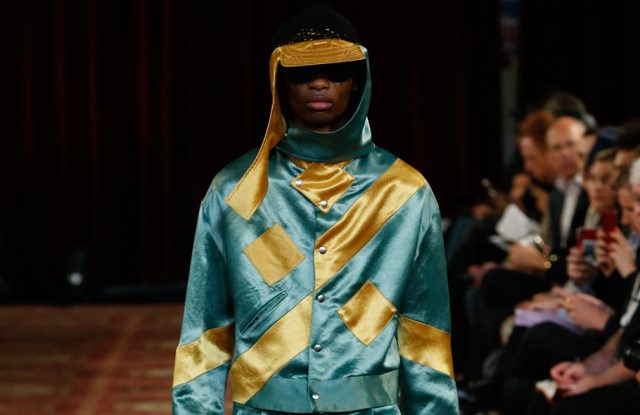 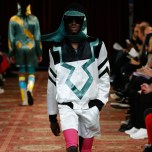 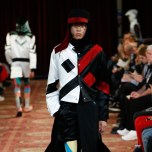 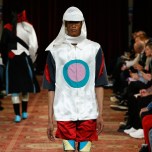 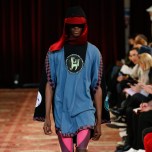 Inspired by the Kentucky Derby, Bulgarian designer Kiko Kostadinov’s spring collection is much lighter and more colorful than its previous one. It gives Equestrian wear a retro-futuristic update. Jockey’s racing outfits are interpreted into smart graphic ensembles. Gold, spearmint, turquoise and apricot silky jerseys, jackets and tunics are spliced with contrast paneling. While the tailoring pieces, a representation of the race’s organizers, are met with constructive details and immaculate cutting.

Having not been on the back of the horse, the designer got interested in the idea when watching one of the episodes of the documentary series “7 Days Out” on Netflix about the Derby, and was amazed by how they prepare 12 months for the two minutes.

The LVMH Prize 2019 edition shortlisted designer likes to take on new challenges each season. “I like being unpredictable and we pick a new direction each season at the studio. I added so many things I haven’t done before [in the new collection], so much color, color combination, silhouette and printing as well.”

Kostadinov also unveiled two shoe collaborations with Camper and Asics at the catwalk show. They are two sides of the same horse-racing story. Camper’s tall leather riding boots with a curved silhouette works well with matching shiny campy jackets and shorts, while his fifth collaboration with Asics featuring a model called FlyteFoam sole with floral tread, a curled toe and embossed checkerboard overlay, a pattern commonly seen on Jockey’s racing outfits, which adds a dash of sprinting agility to his more serious tailoring looks in the collection.

“The silhouettes are completely new. I am the first person who can actually make a sole unit. We spent around a year and half to help develop this. For a big company like Asics to invent for us, it’s a big deal,” he said.