Marrakech came to Malibu with a cinematic sunset setting, a runway in the sand and perfectly lit ocean waves crashing at models’ feet. 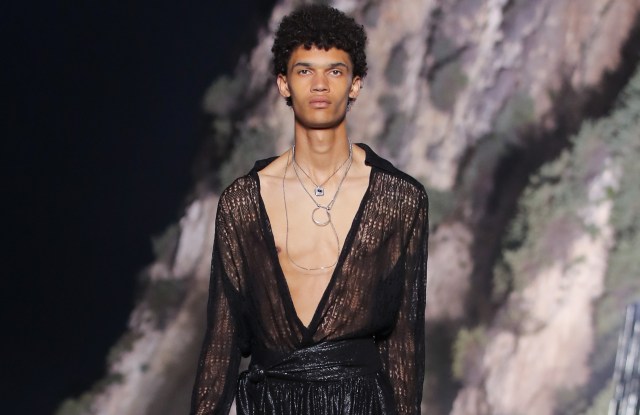 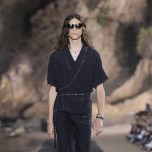 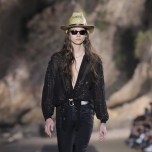 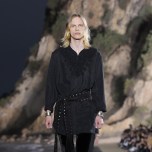 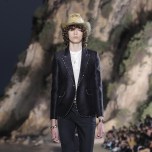 A Hollywood studio couldn’t have done it better.

On Thursday, Marrakech came to Malibu for the Saint Laurent spring 2020 men’s show with a cinematic sunset setting, a runway in the sand and perfectly lit ocean waves crashing at the models’ feet.

“Mick and I spoke a lot of his relationship with YSL in the Seventies, and he was showing me pictures of them hanging out in Marrakech,” Vaccarello said of his wardrobe prep with the superstar, whose “No Filter” tour with The Rolling Stones kicks off June 21 in Chicago.

Rather than making a political statement with the gender-fluid styles (it is Pride Month, after all), the designer said he was trying to express what just comes naturally to young people when they get dressed today. “When I design for a woman, I think about a man and when I design for a man, I think about a woman’s wardrobe,” he explained of his process, adding that he believed it would be more interesting to show Arab-influenced dress in Los Angeles, which he has been visiting since he was a child, than in Marrakech itself, a place to which the brand is intrinsically tied — and also where Dior held its cruise show just weeks ago.

At the beginning of the night. L.A.’s famous June gloom had socked in Malibu’s Paradise Cove, casting a pall on the latest luxury fashion road show. And the rockers-at-the-beach seemed out of their element arriving in skinny jeans, sequin bombers, embroidered velvet capes and Chelsea boots — that is, until they traded those boots for the zebra-patterned Saint Laurent flip-flops on offer at the shoe-check and hit the sand for Champagne.

But once everyone was near the water, the sound of the waves created an unusual pre-show calm that had actor Lakeith Stanfield recording the dreamy view with his phone. Saint Laurent’s latest Hollywood campaign star, Keanu Reeves, was also on the sand, as were Miley Cyrus, Liam Hemsworth, Laura Dern, Hailey Baldwin, NBA star Lonzo Ball, Amber Heard, Amber Valletta and more.

At the click of 8:03 p.m., models emerged from a backdrop of dramatic beach cliffs to walk a wood-planked runway paralleling the shore. The first look — a sheer black, metallic-flecked shirt over tank top and sheer black harem pants — signaled the romantic mood, which carried through to a black silk kimono wrap trimmed in silver hardware worn over jeans, and an embroidered black tunic with fringed sash belt over flared pants, all of which echoed Vaccarello’s bohemian refrain.

He didn’t abandon tailoring altogether — a black-and-silver pinstripe suit had contemporary flair, while a white double-breasted suit was very Mick and Bianca. An oversize trenchcoat with bold lapels was another standout, casually thrown over denim shorts. Indeed, the news was in the ease — and options that could be for women as easily as men, like sheer shirts knotted at the waist; tassel-trimmed velvet wraps; black silk robes edged in silver beads, and a one-shoulder sequin top that would do Billy Porter proud, all worn over black jeans, or wide and wider pants. Extras included tortoise patent lace-ups, white tennis shoes, flat sandals, neckerchiefs, wide-brimmed hats and talisman-like jewelry.

Somehow it all worked without looking too retro-reverential. And anyone who raised an eyebrow at those sparkly harem pants (less Aladdin and more Yves thanks to the grounding wide leather belts they were styled with) just might have been a convert by the time the finale rolled out: a billowy-pants parade of pretty, pretty boys walking to an instrumental remix of — what else? — “Hotel California.”

Keanu Reeves Is the New Face of Saint Laurent

Is L.A. the Future of the American Runway?