Kris Van Assche filled with catwalk with "the most beautiful girls in the world" as he took the Berluti man on a seductive journey. 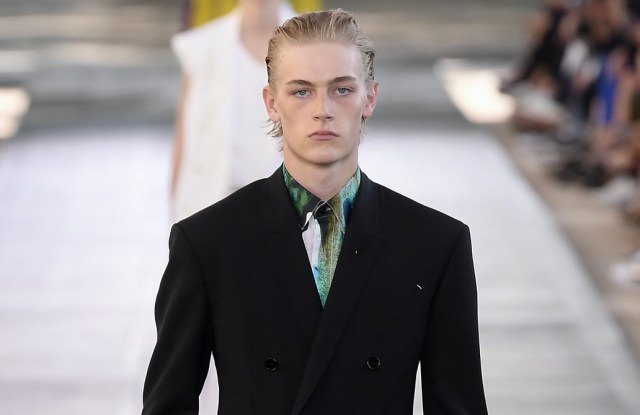 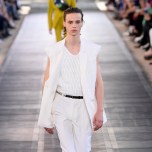 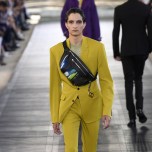 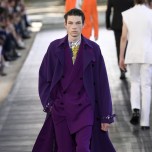 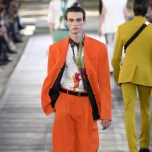 Kris Van Assche opened his Berluti show with an audio clip of actress Anna Karina reading poetry in a Jean-Luc Godard movie, and closed it with Gigi Hadid walking the runway in a mint green sleeveless suit tufted with ostrich feathers. To say the designer had seduction on the mind is putting it mildly.

Speaking in the sweltering backstage area after the show, held at the Orangery in the Luxembourg Gardens in Paris, Van Assche said he instructed casting director Piergiorgio Del Moro: “Bring me the most beautiful girls in the world, because the world needs beauty.”

It bears reminding that Berluti is foremost a men’s shoemaker, and additionally a purveyor of men’s wear. It does not cater to women, at present. Yet since his debut show for the house in January, Van Assche has slipped female models onto the catwalk and into the advertising campaigns to help define his Berluti man.

“It’s a men’s brand, there is no doubt, but it’s also nice to play with seduction to make this Berluti man more sexy that the one I was working on before. This is definitely more grown-up,” the former Dior Homme designer remarked.

Among his weapons of seduction this season was a flamboyant form of stealth wealth, in the form of tonal looks in saturated colors, and leather pieces dyed in the rich shades of Berluti’s patinas, or embossed with the Scritto — an 18th-century manuscript motif that telegraphs the piece’s provenance, but is subtler than a logo.

Van Assche loosened up the suits with flowing pleated pants or Bermuda shorts, and toyed with proportions by chopping the sleeves off jackets with jutting shoulder pads, or splitting the front of trousers to elongate the leg.

He continued his exploration of the company’s heritage by using nail-heads as surface decoration. Van Assche said he got the idea from visiting Berluti’s state-of-the-art “manifattura” in Ferrara, Italy, where he noticed the shoemakers hold the nails in their mouths.

They gleamed in dense rows from a briefcase accessorized with a thick motorcycle chain, and were dusted all over a brown patina leather suit, cross-body fanny pack and pointy shoes. “It’s about tradition and being contemporary. I refuse to think that Berluti should only be about timeless luxury,” Van Assche said.

What Berluti should be about is, to a certain extent, an open book. His predecessors, Haider Ackermann and Alessandro Sartori, each mined the brand’s heritage in their own way. Van Assche’s vision will need some time to take hold, but those women looked like they were onto something.