Kim Jones collaborated with artist Daniel Arsham on a show that straddled the past and the future. 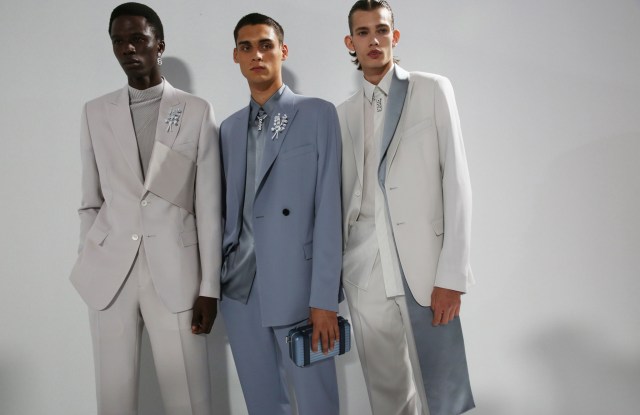 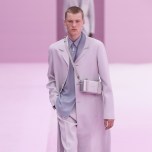 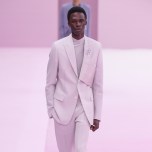 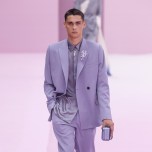 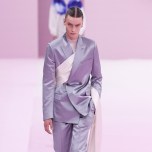 Since making his debut as Dior’s men’s wear designer a year ago, Kim Jones has tapped artists to create everything from giant statues to $35,000 bags.

This season, he provided the most immersive experience to date, commissioning Daniel Arsham to design not only the show set, but also an installation inspired by founder Christian Dior.

Guests entering the tent in front of the Arab World Institute walked through a room that appeared to be caked in volcanic ash. Dior’s signature Louis XVI medallion chairs, telephone and coat stand were just some of the items that Arsham turned into what he calls future relics.

“I like the fact that he’s looking at the present now in a future tense,” Jones said in a preview. “And when I do these collections, I always think about what’s going to go in the exhibitions about Dior…in 50 years’ time, so it’s kind of important to have things that can create a legacy for the brand further along the line.”

The show similarly straddled the past and the future, with a blend of house signatures and trompe-l’oeil effects inspired by Arsham’s signature technique for eroding everyday objects.

Suits featured the flamboyant draped sashes Jones introduced last season, inspired by Richard Avedon’s famous “Dovima With Elephants” photograph. The look has been seen round the world, thanks to South Korean boy band BTS, who wear the striking outfits in the video that opens concerts on their current tour.

Jones rendered the construction in summer-friendly fabrics, without losing its sculptural panache. A pearl gray suit sprouted a satiny white sash dipped in pink dye, to match the color gradient pink-and-white sand runway. In a dialed-down variant, silky panels draped around a single lapel like a contrasting shadow.

The designer nodded to the house’s couture heritage with exclusive creations like a boiler suit in a toile de Jouy pattern hand-painted by kimono craftsmen in Kyoto, Japan. “Only 10 of those can be made a year,” Jones noted. Pleated georgette embroideries by Lesage, in saturated blue or orange color gradients, were too fragile to be offered for sale.

Dior chief executive officer Pietro Beccari needn’t worry: The rest of the lineup was stuffed with covetable merch, including a capsule collection with luggage-maker Rimowa, featuring items such as a case with a bottle of Champagne strapped on top.

Jones noticed the house’s vintage newspaper print, first shown in 2000, was trending on Instagram, so he asked Arsham to help him revive it. A white-on-white version was used on items like a sheer bomber jacket, while a shirt and shorts were printed inside-out for a faded effect.

The artist’s work inspired a wealth of surface treatments: fine cracks appeared on a concrete-colored Dior logo sweater paired with sandblast-effect pink shorts, while a pristine white leather coat looked like it was cast in plaster.

A cotton version recalled the lab coats worn by Arsham and his team (as well as Monsieur Dior himself in his day), while his signature reflective glasses — designed to correct his color blindness — appeared as futuristic shades worn with eye-catching legionnaire-style hats.

Jones is credited with revolutionizing the luxury business with his groundbreaking collaboration with streetwear brand Supreme while he was still at Louis Vuitton. With his formula of revolving artistic collaborations at Dior, he appears to have hit another goldmine: a boundless source of inspiration that also satisfies social media’s voracious appetite for new content.

Luxury brands haven’t always been this open to outside influences. That Jones has succeeded in making the marriage of culture and fashion seem not only natural, but highly desirable, is a tribute to his skill as a designer — and a businessman.