Simon Porte Jacquemus celebrated the 10th anniversary of his label with a spectacular show in a lavender field in the South of France. 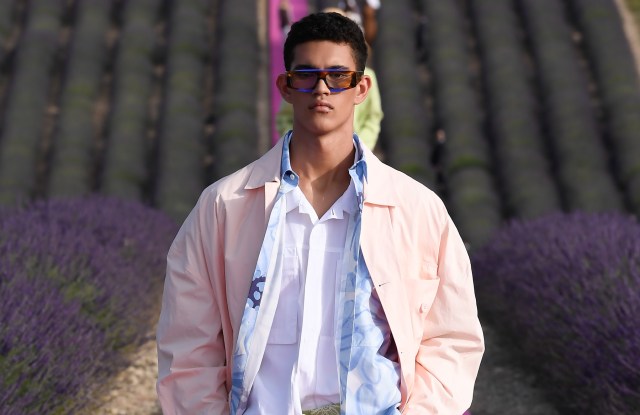 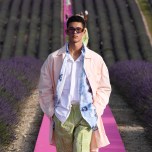 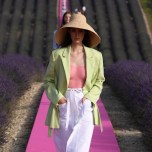 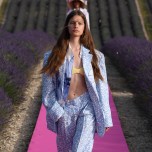 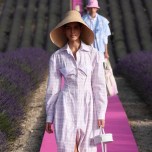 The roving cruise and men’s shows this season have taken the fashion pack to destinations as far-flung as Marrakech, Malibu and Shanghai. And so it was that a day after the close of Paris Fashion Week Men’s, a clutch of editors found themselves sitting in a lavender field somewhere in the South of France.

Guests including Emily Ratajkowksi, Jeanne Damas and Bruna Marquezine gathered near the small town of Valensole in Provence to help Simon Porte Jacquemus celebrate the 10th anniversary of his label with his first joint women’s and men’s show.

An hour’s drive north of Aix-en-Provence, they arrived in rolling lavender fields where a pink felt ribbon of a runway unfurled as far as the eye could see, against the stunning backdrop of the Alpilles mountain chain.

“I wanted a place that looked like a postcard — almost too much like a postcard, even. It was important to me to turn that cliché into something artistic, with that pink line running through the middle like a contemporary art installation by Christo, or a painting by David Hockney,” the designer told WWD.

The invitation came in the form of a small bottle of SPF 50 sunscreen printed with the words “Le Coup de Soleil,” or “The Sunstroke” in English — a very real prospect as a heat wave gripped France, with temperatures set to rise to 40 degrees Centigrade, or 104 degrees Fahrenheit, in some regions.

Down south, the landscape seems tailor-made for such episodes. A female guest wore her sheer clingy navy Jacquemus gown with just a pair of lacy briefs underneath, while one male attendee paired the designer’s sunflower-printed shirt with a bare tattooed chest and a Chanel pearl necklace.

But Jacquemus wants to be known for more than giant sun hats and barely there dresses, so he opened the show with an oversized white pantsuit, a peach lacy slip worn underneath almost as an afterthought. It set the tone for a show that neatly crystallized the crossover potential between his women’s and men’s collection, the latter now in its third season.

Printed, embroidered or laser-burned patterns appeared on roomy short-sleeved shirts worn by boys and girls alike. A handpainted cornflower blue and white floral pattern bloomed on a formfitting dress with sparkling crochet insets for her, and a suit with Bermuda shorts for him, while a fetching artichoke print nodded to his family roots in farming.

Oversized outerwear was another shared wardrobe staple. A woman might wear an extra-large yellow cargo pocket shirt with a filmy pleated knit skirt in sunset shades, and a floppy hot pink sun hat. He might opt for a crisp white cotton poncho, or a pastel yellow windbreaker.

Adding a little extra sparkle to the proceedings, Jacquemus teamed with Swarovski for the first time, sprinkling 385,000 crystals on women’s and men’s looks, in addition to shoes, bags, earrings, bracelets and hats. The partnership felt unforced on items like a bedazzled polo shirt, worn as a dress.

Though a breezy sensuality ran through the display, Jacquemus said he wanted the outfits to look like they had landed from elsewhere.

“This collection is not at all about Provence. It’s about the codes of the house, about other places, about all these women who have inspired me that were not from here, who were overdressed, and these guys who wear too many prints, but who still look cool,” he said.

The 29-year-old designer has parlayed his vision into a rapidly growing business. He expects to generate sales of between 23 million euros and 25 million euros in 2019, up from 11.5 million euros last year, fueled in part by the explosive growth of accessories, with handbag styles such as the best-selling Chiquito.

Among the novelties this season were bags shaped like biscuit tins and lavender sachets, giant printed cotton totes and straw bags with colored leather handles.

His show setting brought to mind Pierre Cardin’s spectacular runways in far-flung locales like the Gobi desert. “Pierre Cardin is someone I’ve always admired,” Jacquemus conceded. You had to admire the guy’s chutzpah, even if the logistics were challenging. Guests fidgeted on a long bench, shielding themselves with white umbrellas, during the long wait for the show to begin.

Jacquemus said his team had it even worse. “The working conditions were very tough. The heat wave this afternoon was insane,” he said. Still, he wouldn’t have it any other way.

“Everyone told me it was impossible, but I had no choice. At Jacquemus, we always have to put the cart before the horse. It’s really very important,” he said earnestly. “You have to think big, otherwise you don’t achieve anything. If you try to compare yourself to others, if you try to play by the rules, it doesn’t work.”

It was something he believed when he dropped out of fashion school at the age of 19, prompted by his mother’s untimely death, and grabbed the attention of fashion editors by staging a street happening in front of Dior during Paris Fashion Week.

Jacquemus is still that maverick young man, going out of his way to stand out from the crowd. On Monday night, he was on top of the world.