Virgil Abloh offered a stop-and-smell-the-roses moment — a literal one at that — with billowing outfits sprouting fresh blooms. 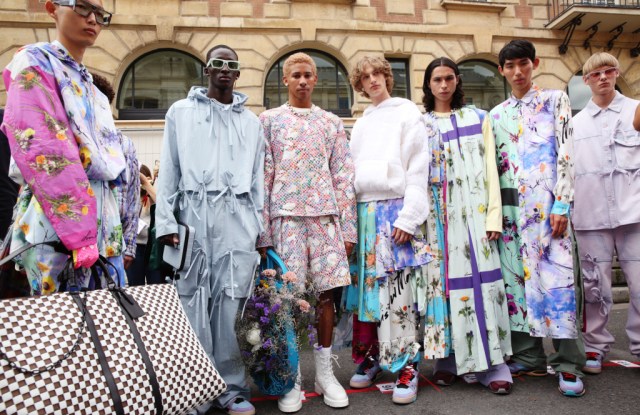 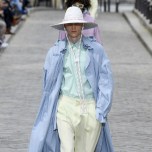 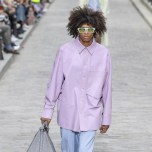 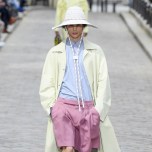 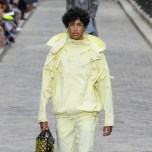 When searching for locations for his Louis Vuitton spring collection, Virgil Abloh initially wanted to wrap the Pont Neuf bridge right next to his Paris office.

He contacted Christo, who with his wife Jeanne-Claude, had clad the bridge in their signature polyamide fabric in 1985. But the artist told him he doesn’t work with private sponsors, and besides, he already had his eye on another landmark: Christo is set to wrap the Arc de Triomphe next year.

So Abloh decided to stage the show on the square in front of Notre-Dame Cathedral instead — and we all know how that worked out.

In the end, the designer decided to use the most spectacular backdrop Paris has to offer: its streets. He took over Place Dauphine, the postcard-pretty square where Carrie Bradshaw took a stroll in “Sex and the City,” and turned it into a playground, complete with a red bouncy castle and stands dispensing crepes and ice cream.

American football player Cam Newton puffed on a cigar as he sat on an oversize bench with Lewis Hamilton and Victor Cruz, their feet dangling inches off the ground like children.

The show offered another stop-and-smell-the-roses moment — a literal one at that — with billowing outfits sprouting fresh blooms. It opened with softly tailored looks in dusty shades of pink, yellow and teal, including a faded blue T-shirt with a floral version of the harness made famous by Timothée Chalamet at the Golden Globes.

“I’m keen on using flowers as a metaphor for diversity,” Abloh explained. “When you go to a field, it looks amazing and beautiful from a micro level and a macro level. How does that look beautiful? Not every flower is the same.”

Not every man is the same either, he reckons, which is why he offered a bunch of experimental silhouettes alongside his baggy pants — some with chunky ties and 3-D cargo pockets — and oversize streetwear tops with botanical prints.

They ranged from formal jackets with wavy cutout panels to a hoodie in a floral-printed silk mousseline that was densely pleated, using the sort of technique you might normally find on an haute couture gown. A businesslike gray jacket, meanwhile, was embroidered in the back with lace motifs representing Notre-Dame and the Pont Neuf.

“I always wanted men’s wear to feel as expressive as women’s wear does on the red carpet,” Abloh mused.

He nodded to Christo by tying ropes around everything from a fuchsia crocodile leather hoodie to a slate double-breasted suit, and let loose his more playful side by attaching kites to white tops sprouting sculptural organza renditions of backpacks, fanny packs and weekend bags.

With its laid-back setting and mellow live soundtrack, courtesy of the Heritage Orchestra, the show provided a welcome respite from the frenzy of fashion week. Also: By keeping the theme more generic, Abloh sidestepped the risk of controversy, after his unfortunately timed homage to Michael Jackson last season.

“I kind of learned my lesson. I tried out a new recipe. I don’t need to be inspired by something so poignant,” he acknowledged. “It’s just spreading a message at a frequency that doesn’t allow for it to be polarizing.”

Some might see it as Abloh going corporate, a year into his tenure at the world’s biggest luxury label. Others will just stop and soak up the wonder of his garden of earthly delights.