Models opened the show wearing see-through organza suits that were stuck to their drenched skin, clinging onto every curve. 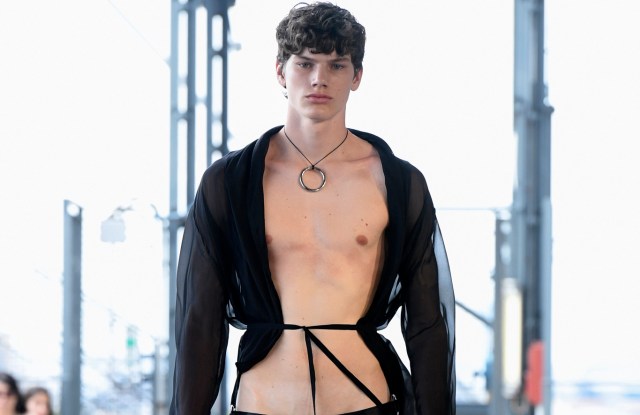 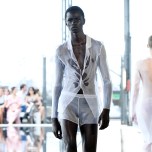 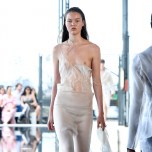 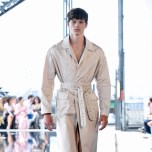 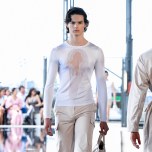 “He basically makes clothes to have sex in,” whispered a guest at the Ludovic de Saint Sernin spring 2020 show, held on the upper level of the Centre Pompidou museum with a panoramic view of the Parisian skyline that no one was paying any attention to.

The focus was very much on de Saint Sernin’s racy silhouettes, which managed to be both sexually charged and somewhat poetic.

Models opened the show wearing see-through organza suits that were stuck to their drenched skin, clinging onto every curve. They were followed by delicate knits with front and back “sweat patterns” made of different layers of fine merino wool; a polo shirt with a teardrop opening over the model’s left nipple and a Swarovski crystal-covered pair of flares, worn with nothing else.

“I told you it was going to be hot and humid,” laughed the designer backstage, adding that models were sprayed with water before hitting the runway, some with additional Swarovski crystals stuck to their bare skin to simulate beads of moisture. “The idea is that you don’t know if they have just come out of the water or they are sweating. It’s wet and wild.”

Wild it certainly was: A belted trenchcoat with an eyelet belt was worn with very little else (we asked) while around necks dangled metal cock rings on leather strings. “It still looks like a beautiful necklace that you can wear everyday,” de Saint Sernin said mischievously, adding that the pair of leather briefs that closed the show also featured cock rings as side-ties, “to be used if you want — you have the option.”

It was, believe it or not, a beautifully executed collection, managing to be both aesthetically pleasing — the women’s looks, a new push for the brand, consisted in twisted silk and muslin dresses, some of them held up with tubular glass jewelry — and heavily tongue in cheek: One model came out wearing what looked like a towel around his waist, but it was actually a merino wool skirt.

“We were going to have him drop the towel, but then we figured we’d keep that for another time,” said de Saint Sernin.