Mahéo has a lot of magic up his cool cotton sleeve. 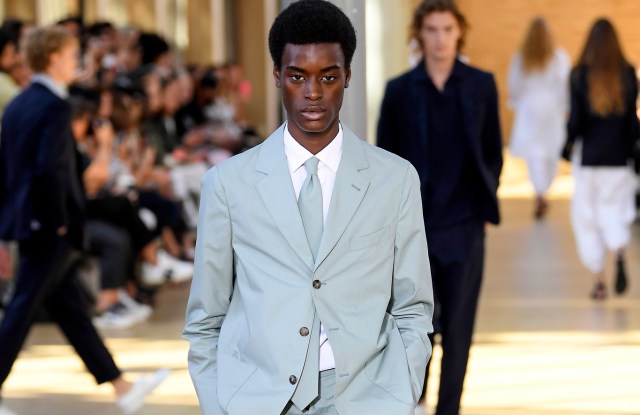 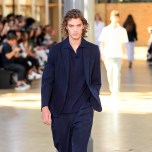 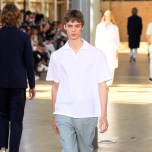 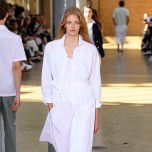 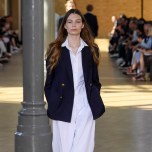 There’s something about Pierre Mahéo that has men and women alike rushing over to him post-show and gushing about his spare shapes and effortless chic. It’s rare, too, that anyone gets that worked up about a contemporary brand, especially one that serves up laid-back classics meant for everyday dressing.

Mahéo has a lot of magic up his cool cotton sleeve: His clothes work hard to enhance the male and female figure alike, and he’s quick to conjure a mood. This collection was all about holidaying on the southern Italian island of Ischia with all of its port-side bars and fizzy cocktails, motor scooters zipping around town, and green mountainsides.

This summer paradise also got Mahéo thinking about chic Fifties outfits in the 1960 French film “Plein Soleil” and “The Talented Mr. Ripley,” both of which were based on Patricia Highsmith’s psychological thriller.

Yet there was nothing dark or underhanded about this collection — just a lineup of covetable shapes in gentle, weather-beaten shades of peach, lilac or mint: Cotton suits were worn with ties, and trousers cropped at the ankle.

There were short-sleeve shirts printed with palms or cloud-dotted skies, trousers done in a bandana pattern with white piping down the leg, and flat-front styles with built-in belts.

A silky skirt, top and cummerbund belt came in a shade of fresh sage, while tuxedo-style shirts had tiny ruffles spilling down the front. There was lots of white denim with raw-edges, flat sandals and white plimsoles.

This collection was so right, it wouldn’t come as a surprise if models refused to give the clothes back.

Mahéo, the label’s founder and designer, said he simply wanted to conjure a summer mood after such a miserable rainy spring in Paris, and for the clothes to feel as if they’d been kissed by sea salt and wind and sun. This was French nonchalance at its very best.