The Soloist opted for a duet, teaming with artist Yoichiro Uchida, who added a playful touch to the futuristic collection. 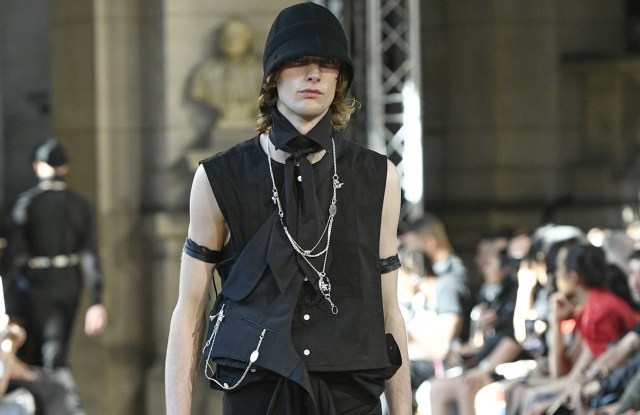 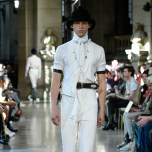 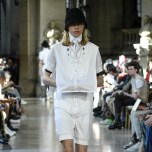 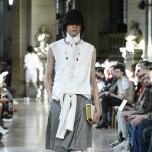 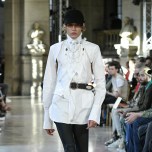 Plucking staples like long johns, military vests and firemen and army hats from different periods to use as props for his sleek, belted universe — black and white only — Takahiro Miyashita moved into softer territory this season without losing his subversive edge. This futuristic world had tailored jackets on top, and biker shorts or fitted leggings on bottom, anchored at times by tightly wrapped fabric gators. Footwear was chunky, toggling between thick, patent leather orthopedic numbers and basketball sneakers from a Converse partnership. Most interesting was higher up. Military suit coats became intricately detailed, elegant affairs; so, too, were the long johns — but even more refined.

“Long johns are very cheap — you can buy them in America — but they can also be something different,” the soft-spoken designer said backstage after the show. Something different indeed. Long or short, they were made of the lightest cupro fabric, with delicately stitched pockets.

The military props and tailoring styles telegraphed  officialdom. But the slender, soft-cheeked models and a sprinkle of rhinestone belts, long tassels of white pearls and heavily padded biker shorts veered toward playful. Subtle Mickey Mouse silhouettes popped up on jackets as mini patterns, woven into the clothing or applied as a black-on-black patch, sewn to the back of a suit coat. Words scrawled all over the ultra-thin nylon jackets — one had a built-in pack — came from artist Yoichiro Uchida. The soloist had opted for a duet for a season. Strength in numbers, but also, extra lightness.