The collection is inspired by designer Mike Amiri's Los Angeles roots and features a blend of tailored and sportswear. 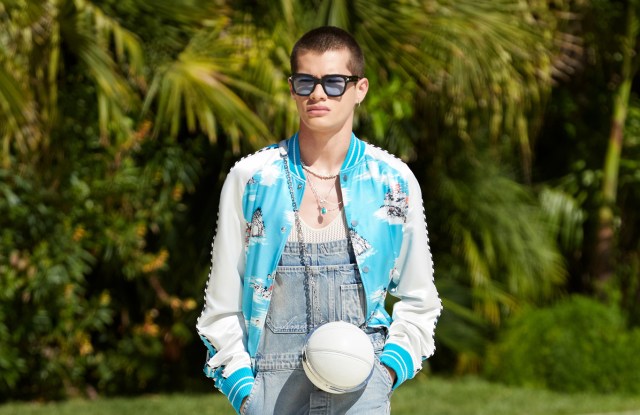 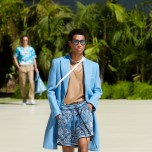 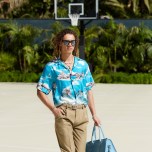 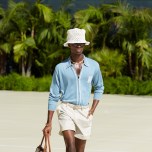 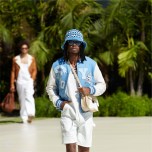 Mike Amiri is embracing his Southern California roots for his spring 2021 men’s collection.

The Los Angeles native, who even attended Beverly Hills High School, has shown his line in Paris for the past three years, but with the pandemic putting a halt to that for the time being, Amiri quickly pivoted and created a tribute to West Coast culture.

His virtual show on Friday was filmed at the Sheats-Goldstein Residence, a spectacular property built in the early Sixties by architect John Lautner. Staying true to the theme, the musical backdrop for the virtual show, where models paraded down an outdoor basketball court, was an original mix created and performed by L.A. producer The Alchemist.

“It really added to that L.A. spirit,” Amiri said of the location and soundtrack.

But while the collection may be overwhelmingly influenced by California with its light palette and upbeat prints, Amiri’s time spent in Europe was also evident.

“Over the last few seasons, I’ve been traveling so much to Europe and Paris and Italy, defining our silhouettes and codes, but coming back to Los Angeles, I’m bringing back everything that we learned there and combining that with the original source of inspiration. That’s been really refreshing,” he said.

That translates into Amiri’s signature relaxed tailoring artfully blended with colorful Seventies-inspired sportswear. Softly constructed double-breasted blazers were paired with cashmere basketball shorts and a silk shirt; collegiate varsity jackets were worn over leather knee-length “jumpsuits,” or overalls, and woolen overcoats were wrapped around drawstring nylon shorts and louche T-shirts with silk trim. One standout item was an edge-painted basketball short that the designer said was “constructed almost like a handbag,” another nod to the artisanal skills the brand learned in Italy that he managed to replicate in his manufacturing facilities in the U.S.

Although there were tailored pieces, the overall aesthetic was laid back and purely California, whether that was a parka offered as a casual outerwear option or a bomber with a cannabis print — all looks that speak to the “nostalgia” of the city as “interpreted through the eyes of a native.”