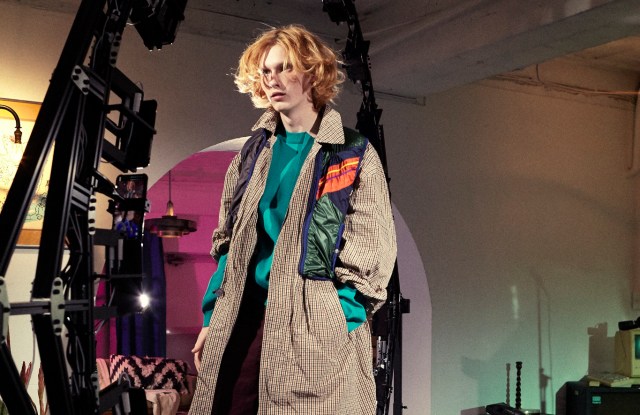 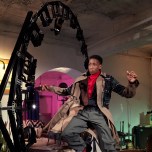 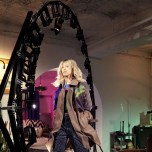 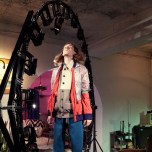 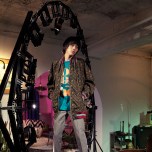 For spring, Junichi Abe sent classics on a spin, layering child-sized clothing on loose, grown-up silhouettes. This season’s coed lineup was especially youthful and dressier — the designer used the term “snobbish.” He had a past collection in mind; fall 2011 stuck with him for several reasons.

“This collection had a sense of snobbishness, decadence, simpleness and elegance,” he explained in an e-mail, describing the lineup from a decade ago. He sought to capture that same mood, while spinning it to the future.

Spin he did: His film showed models spinning horizontally around a living room setting cluttered with plants and a leather lounge chair — playful and dynamic, if a tad dizzying.

Layering was the focus. A kid’s silver windbreaker was thrown over a similar coat, but for adults, in bright orange with purple cuffs. An adult-sized bomber jacket, with a Kolor logo pattern, was layered over an enlarged bomber jacket of the same material. Other looks paired polo shirts and cardigans that were spliced together with flared trousers — new this season for women.

Women’s skirts were long and layered; one had a spray of tulle across the bottom; another a panel of pleated organza attached to the side — red and turquoise. The latter was paired with a shirt that had Con-Crete written across the chest, in a font that resembled the Coca-Cola logo.

With his compelling explorations, the designer continues to push the classics into new territory. It’s traditionally worked the other way, but maybe parents should start raiding their children’s closets.