Jonathan Anderson's collection in a box perfectly expresses his brainy approach and flair for craft. 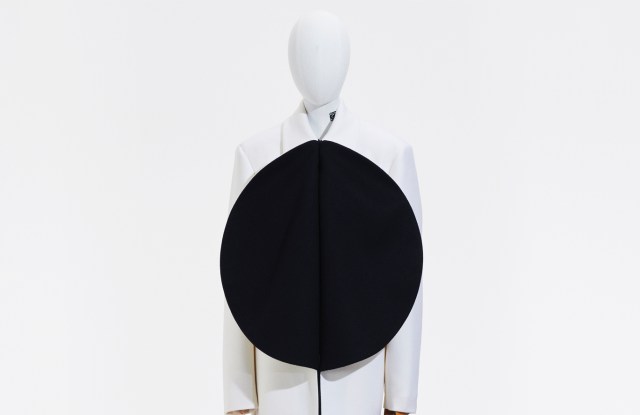 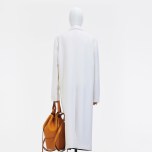 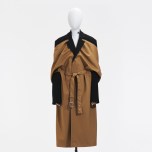 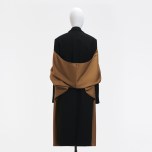 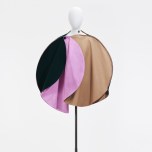 Jonathan Anderson’s interactive show in a box for Loewe takes the cake, complete with fabric swatches, color chart, a pop-up set, and a voiceover soundtrack on a vinyl 45, to be played on a rickety cardboard player you spin with your forefinger. It’s all contained in a hard-case filing box, perfectly expressing Anderson’s brainy disposition, and his penchant for do-it-yourself and craft.

Thumbing through the gray file folders, the “Inspirations” tab harbors a yellowed leaflet describing the six photographs, three paintings and “soft light switch” sculpture by Claes Oldenburg that inspired Loewe’s spring 2021 men’s wear and women’s pre-collection. (There are no images of the artworks, you have to Google them.) They span from the 1600s to the Nineties and include two Diego Velázquez paintings of an older man in torn clothing, and a 1902 photo of French dancer Loie Fuller, who was also listed as an inspiration for Valentino’s fall couture. Fashion seems to be in a mood for artful swirls of fabric.

A flip book of the collections reveals a men’s trenchcoat with great swags of gabardine for sleeves that culminate in a colossal doughnut of fabric on the back, like a fitted sheet draped from the shoulders. There’s a whiff of Pierre Cardin in the oddball circular capes, coats with portholes, and sweaters with hoop sleeves. Most shapes are elongated and eccentric, with vaguely Renaissance airs. The tie-dye looks, realized with the Japanese Shibori technique, retain their wrinkles and dimples.

In a Zoom call, Anderson said he opted for more of an item-based offer exalting a variety of craft techniques that are demonstrated in online videos. “Fashion needs to be honest in the next while,” he shrugged, also describing the bags as “straightforward and very direct.”

Asked about the men’s business, he replied: “We’ve been very dynamic in this moment.”

The women’s pre-collection, minus the kooky Space Age sweater dresses with their hoop skirts and sleeves, is simply ravishing. Long, wrap-style dresses, lightly bulging on one hip, are powerfully chic. Ditto the gauzy white dresses with delicate smocking or scarf details, and the shearling coats with giant portrait collars.

Anderson pings between soigné chic with eccentric details — here black pantsuits with a waterfall of colored raffia from one hip — and more experimental fare, including pants so big and droopy only a leather harness could hold them up. That’s what makes him such a fascinating designer.

And with this project, accentuated with hourly videos on Sunday so every time zone could take part, Loewe becomes a preeminent creator of content, generously unpacking what’s inside the head of its creative leader and letting people engage with his creations. One tab of the box shelters a paper pattern for look No. 23, and if that’s too much work for you, you can always build cardboard boxes stamped with clothes on bust forms, or pop-out sunglasses that have been printed and stamped on cardboard. The peepholes probably won’t line up with your eyeballs, but that seems to be Anderson’s point: He wants us to see things differently.

“You have to build a dialogue with the audience with more humility,” he said, noting that the lockdown period had most people doing more things with their hands, whether cooking or knitting.

“I think people want emotional sharing at the moment,” he mused. “People don’t want a veneer.”