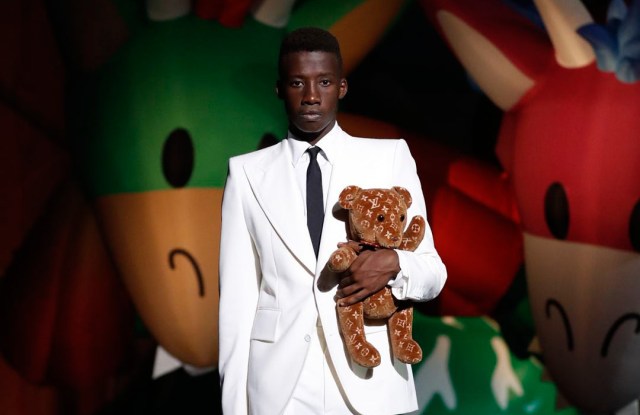 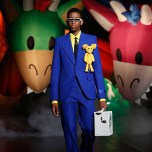 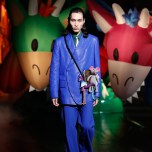 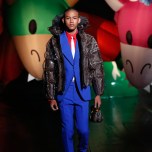 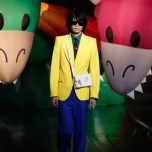 TOKYO — Following a show in Shanghai last month, Virgil Abloh presented his full spring men’s collection for Louis Vuitton at a cruise terminal in Tokyo Bay on Wednesday. The show included around 60 new looks that had not been previously seen.

Just as in China, Abloh — who was not able to be physically present due to COVID-19 travel restrictions — set the scene with branded red shipping containers and a variety of cartoon-like inflatables dotted both along the runway and in the reception area. Safety measures taken included a small crowd of only 180 guests, spaced out seating, and an outdoor venue. Guests wore face masks, and staff at the show wore both masks and face shields.

These differences led to a much more subdued mood than fashion shows that took place last year, but Abloh did his best to lighten things up with a colorful, cheery collection. Tailored suits in bright tones of blue, pink, red and yellow were mixed in with separates in hypnotic black-and-white checked patterns. They were accessorized with hats reminiscent of Johnny Depp’s Willy Wonka and sunglasses that recalled the device worn by LeVar Burton in “Star Trek: The Next Generation.” Other details included wide, sharply structured shoulders, aggressive ruching around the knees and calves of trousers, and the same toy-like stuffed figures that were seen in the Shanghai event.

In a prepared Q&A sent out to journalists before the show, Abloh dismissed claims by Belgian designer Walter Van Beirendonck that he had copied the childlike motifs from the latter’s previous collections, saying that his work was “not within my frame of reference.”

“As a member of the purist canon of the fashion industry I am aware of him by name, but certainly not the granular look-by-look nature of his collections,” Abloh’s statement read. The Vuitton men’s artistic director said that his inspiration for the collection came from his Ghanaian heritage, as well as from gifts he had bought for his children at a toy store in Paris.

Louis Vuitton teased the show with some of its very first TikTok posts Tuesday, making it the latest luxury brand to look to leverage the video sharing platform to target Gen Z consumers. The show was also streamed live to viewers around the world on the brand’s web site.

Abloh envisioned the show as something of a parade, with models emerging in small groups and freely making their way down the long runway. Along the way some danced, some observed the inflatables, and some even talked amongst themselves, while others seemed to wander somewhat aimlessly. This festive atmosphere was reflected by the fireworks display that followed the finale to close out the event. And while overall it may not have been enough to lift guests out of the funk that the year 2020 has brought, it at least brought a moment of levity.

“Since all the events, trips and festivals were canceled this year, it has just felt like nothing more than a hot summer,” wrote Motofumi “Poggy” Kogi, who was a guest at the show, on Instagram. “Seeing fireworks after so long made it finally feel like summer.”