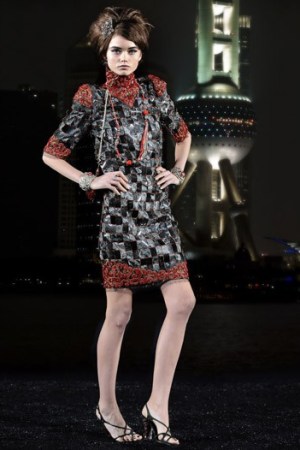 Following his spectacles on the Great Wall and along the canals of Venice, Karl Lagerfeld on Thursday night used the Huangpu River and the neon-lit skyline of Shanghai as the dramatic setting for Chanel’s latest pre-fall collection extravaganza.

True to form, Lagerfeld let the surroundings tell a story before any model strutted forth, draping a 280-foot-long barge in matte ebony and projecting his own imagined voyage of Coco Chanel’s trip to China, titled “Paris Shanghai, A Fantasy,” above. The images offered insight into the clothes: with some looks, Lagerfeld hewed toward straightforward Chanel — sharp tweeds in white and evergreen, edged in black; pushing the office girl into the night, he tossed slim little jackets over leather leggings. This was hardly a traditionalist affair, however, as the influence of Asian embellishments and hues became clear in jewel-encrusted panels on dresses and coats and ripe, bright reds rendered on a gorgeous wasp-waisted gown and the piping of a boxy black coat. The multiple inspirations: the “Terracotta Army,” Chinese cinema, and the over-the-top opulence of the Imperial Court.

More than 800 people attended the show, each climbing aboard Lagerfeld’s floating fantasy via a bridge adorned with white, yellow and orange pansies. (As with all great fashion these days, it was a fantasy grounded in reality: A spokesman noted eight people were in “constant surveillance” of the barge’s anchors to ensure the whole place didn’t float out to sea with the tide.) Indeed, the glittery landscape was worked seamlessly into the runway tableau, as with an elegant gray-green tunic, inspired by the traditional Mandarin Qipao gown, its arms laced with gold jewels, and a simple black dress with a high-neck and cap sleeves covered in crimson and silver beads.

Yet while Lagerfeld showed his affinity for the Far East in plenty of details, including accessories that dripped from ears and necks, at the end of the evening it remained evident to whom the designer remains committed: at the after party at the Peninsula Hotel, French icons Vanessa Paradis and Anna Mouglalis performed alongside the Shanghai Jazz Orchestra and Chanel String Band.

READ ON: Karl Lagerfeld discusses his inspirations for the collection>>