The designer built on his signature hybrid of sportswear and tailoring, tweaking sharp cuts and men’s wear fabrics in a playful yet edgy way. 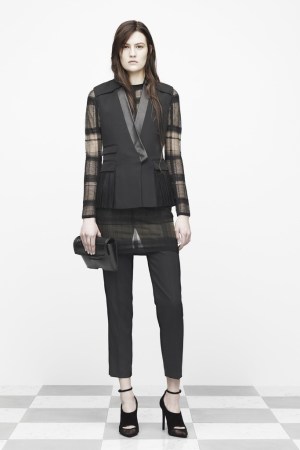 Alexander Wang built on his signature hybrid of sportswear and tailoring for pre-fall, tweaking the traditional aspects of sharp cuts and men’s wear fabrics in a playful yet edgy way. “We started with the idea of tromp l’oeil, something quite classic but less in a whimsical way and more the idea of deceptive textures and patterns,” said Wang. Something like herringbone, for example, appeared as a burnout mesh sweater, printed on a nylon Windbreaker and waxed to a sueded finish on a classically tailored jacket. He also played with the concept of sealing and wrapping things by closing the welt pockets on a jacket, layering a white shirtdress under a cropped “cellophane” intarsia top, or cutting slits into collars and lapels on jackets and tucking the models’ hair through them.

As for accessories, many of the shoes and boots were done in sheer mesh. The clutch of the season is an oversize sunglasses case, and there’s also the Rockie bag, a smaller version of Wang’s popular Rocco. Wang reported that the size of this pre-fall season had grown by 50 percent over last, and exceeded even his most recent resort collection. That’s due in part to the official launch of Core, his capsule collection of basic tailoring that’s priced at entry level ready-to-wear and will only be sold during pre-collections.