Continuing a move into more cleaned-up silhouettes, eyelet was rendered with activewear touches. 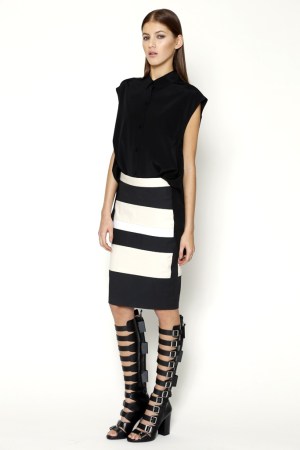 “Sand to sidewalk” is how DKNY’s pre-fall lineup was described in the press notes, and those hues — mostly black, white, stone and cement — underscored the versatility of these clothes. Continuing a move into more cleaned-up silhouettes, eyelet was rendered with activewear touches via cut, seaming and piping, while architectural colorblocking played with the idea of illusion. Meanwhile, graphic stripes — from engineered to parasol-style — appeared on several looks, including a cool tank dresses.