Nasty and nice. Like Maggie in “Cat on a Hot Tin Roof,” the seductive combo informed the designer for pre-fall. 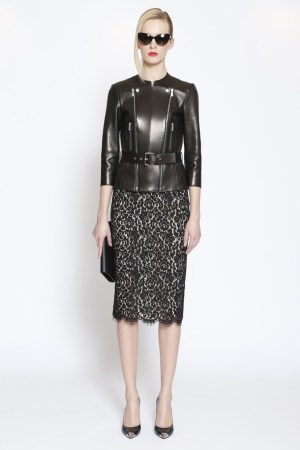 Nasty and nice. Like Maggie in “Cat on a Hot Tin Roof,” the seductive combo informed Michael Kors for pre-fall. “There’s a phrase you don’t hear anymore: ‘She’s a real broad,’” Kors said, citing Scarlett Johansson, who makes her debut in the Tennessee Williams play on Broadway in January. “Scarlett takes me to Elizabeth Taylor, which takes me to Ava Gardner, and to Madonna. It’s the idea of sugar and spice.” Thus Kors combined tough leather with touches of fine chantilly and guipure, such as a slick black moto jacket worn over a chic lace pencil skirt. Many of the looks also had a distinct Fifties Hitchcock vibe. Fitting, perhaps, since his muse Johansson also plays Janet Leigh in the new “Hitchcock” film.