Karl Lagerfeld orchestrated a fashion moment as rich in its sweep of history as in its bounty of modern luxury merch. 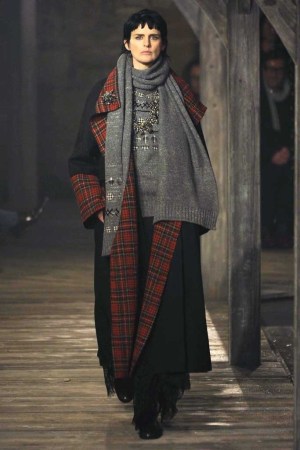 Consider the effect it had on Gabrielle Chanel. Thanks to her love affair with the Duke of Westminster, whom she met in 1923, the designer took up such outdoor pursuits as fishing, hunting and long walks across the moors, adopting the heavy woolens and tweeds men wore and absorbing them into her singular fashion universe.

On Tuesday night, Karl Lagerfeld magnified that legacy with his imagination and Chanel’s mighty budgets and savoir faire, the latter of which this year grew to encompass two more speciality ateliers, including the Scottish cashmere expert Barrie Knitwear.

As bonfires sparked under the drizzle pelting the roofless Linlithgow Palace, the partially destroyed stone edifice that was the birthplace of Mary Queen of Scots almost six centuries ago, Lagerfeld orchestrated a fashion moment as rich in its sweep of history as in its bounty of modern luxury merch, from cuff bracelets adorned with thistle motifs to a chain-handled carrier in quilted leather for the new iPad mini.

“It’s the idea of Scotland, the mix of Coco Chanel and Mary Stuart — two queens of fashion,” Lagerfeld mused in his witty fashion, hastening to add that the French designer “had a better end” than the Franco-Scottish monarch, who was convicted of treason and decapitated in 1587.

“The idea of the 16th and 17th centuries, and modern sportswear,” Lagerfeld said of his freewheeling mix of Renaissance silhouettes juxtaposed with jaunty shorts or plus fours, argyle-patterned hose and Dr. Martens-style boots.

Guests were agog at the imposing venue, as waiters in medieval tunics circled proffering whiskey and smoked salmon canapés on wooden trays.

“Spectacular. They’ve really gone to town haven’t they?” actress Sophie Kennedy Clark, who hails from Aberdeenshire in Scotland, marveled as she surveyed the wooden canopy Chanel had constructed to shelter the audience, a lap blanket placed on every seat. “It’s very ‘Macbeth.’ ”

“I’m completely awestruck,” added English actress Amber Anderson, whose next movie, “We Are the Freaks,” is set in the early Nineties, giving her a chance to sample that recent era’s fashion hallmarks. “It was a lot of Doc Martens, military jackets, nude lipstick,” she rattled off of her movie costumes.

French actress Amira Casar posed for photographers just as the rain turned into flakes of snow, which she brushed off her fur cape. “It’s not dandruff,” she laughed.

Swedish actress Alicia Vikander, Poppy Delevingne and Lady Isabella Cawdor were among other VIPs at the show.

Crowds of young Scots waited behind barricades in the rain outside the castle walls, yelping with excitement and snapping photos of vehicles arriving at the event, no matter who was sheltered behind the darkened windows.

To be sure, Lagerfeld had kicked off Europe’s pre-fall season in extravagant fashion with this métiers d’art collection, a luxury ready-to-wear range he introduced a decade ago to exalt the specialty ateliers Chanel owns through its Paraffection subsidiary. (They are the glove maker Causse, embroidery firm Montex, the embroider Maison Lesage, gold and silversmith Goossens, shoemaker Massaro, hatmaker A. Michel, feather house Lemarié, button specialist Desrues and flower house Guillet.)

The collection was a tour de force of haute workmanship and chic cold-weather dressing as the designer made a convincing case for enveloping knits, robust tweeds and lively mixes of plaids, checks and tartans.

Lagerfeld played with iconic Scottish styles like the kilt, transforming it into peplum jackets, coats with swagger and soigné evening skirts in black crepe de chine, banded in lace.

Robust tweeds came in exploded patterns and multiple textures, always custom-made to Chanel’s specifications and often embroidered to make it well-nigh impossible to copy. Lagerfeld made them young and fetching in blouson and cardigan shapes, either billowing or taut.

The show climaxed with a parade of sleepwalking damsels in ivory sweater gowns and lingerie-inspired tops, dresses and skirts in peach satin. An ivory sweater with a stand-up collar and tufts of feathers at the shoulders was shrugged over a frothy lace gown.

During fittings on Monday, in a ballroom at the Balmoral hotel with a view of Castle Rock and the gothic Scott Monument, Lagerfeld added the finishing touches, plucking jewelry from tables and hats from the floor.

“For the métiers d’art, we can throw it all over the place, which we wouldn’t normally do in a Paris show,” he explained.

The flurry of accessorizing came to a momentary halt at the sight of four-year-old Hudson Kroenig, son of model Brad Kroenig and the godson of Lagerfeld, in his runway outfit: a beaded velvet jacket and tartan kilt worn over matching trousers.

“Wait, I have to take a photo of you immediately,” the designer said, training the lens of his iPad mini on the tot. At least six other cameras also recorded the moment.

“Hudson, do Blue Steel, do your model face,” Kroenig called out to his son, reprising a line from the fashion farce “Zoolander” about dueling male models.

Then the Slovakian model Kinga Rajzak appeared in a slope-shouldered tweed jacket. Lagerfeld grabbed two supple bracelets, but instead of wrapping them around Razjak’s wrists, he draped them across her collarbones.

“Bracelets as shoulder pads, why not?” he asked. “There are still a few things we haven’t done before.”
The fashion show was preceded by a visit to the Barrie facility — a snaking 90-minute drive south of Edinburgh, across the River Tweed and through valleys dotted with sheep — where Chanel’s famous two-tone cardigans and other sweaters have been produced for 25 years.

Bruno Pavlovsky, president of Chanel fashion, said knitwear ranks as Chanel’s second largest ready-to-wear category after jackets. “It’s a growing part of our business,” he said, describing knitwear as an “entry point” for younger customers, since a cardigan rings in at about half the price of a jacket.

Journalists toured the factory as production of Chanel’s spring cardigans — blue and pink combos mainly — was in full swing. Eyes widened as a worker scissored open the fronts of cardigans, and sliced out a notch on each cuff.

Clive Brown, who cut his teeth in Barrie’s specialized laundry room and is now commercial director, noted that workers in its finishing department must spend from 12 to 18 months perfecting their precision work. “There’s a lot of time spent cutting fabrics before they’re allowed near sweaters,” he said to a round of chuckles.

Chanel, which rescued Barrie when its parent company, Dawson International Trading Ltd., was placed under administration, accounts for about a quarter of its production capacity — and with labor-intensive designs.

Brown noted that its workers can devote three to four hours crafting a Chanel sweater, compared with three or four minutes for a basic crewneck for other brands. A single sweater can be composed of up to 30 components, and pass through up to 40 operations, from washing and measuring to steaming. The double-C’s on buttons must be sewn so the letters appear exactly level, and only once each seam and stitch is eyeballed through fluorescent cones can the garments earn their Chanel label.

“The whole factory is geared to quality,” stressed Jim Carrie, Barrie’s managing director, not — as he pointed out — the famous comedic actor.

As the two men guided a group of visitors past clanging machinery, computer rooms and stations where workers painstakingly pieced together knit sections, Brown repeatedly said there were quicker ways to make sweaters. “But we don’t believe simple is best,” Carrie added.

Founded in 1903 as a hosiery maker, Barrie is one of the strongest knitwear players in the region left standing as production has drifted to Italy and the Far East, and as young people favor sweatshirts over more formal knitwear. It employs 176 people in Hawick, population 15,000, in the Scottish Borders region, a heartland of cashmere and merino wool manufacturing since the late 18th century.

Thanks to Lagerfeld’s creative output at Chanel — there are now six rtw collections a year — downtime at the factory has been replaced by overtime, Brown said, flashing a big smile.

Pavlovsky said the popularity of the brand’s métiers d’art collection, delivered in May and with prices running into the five figures, speaks to the fact that Chanel’s customers value exceptional creativity and extreme quality.

“In luxury and fashion, if you want to be a part of this business, you have to use the best components,” he said. “Our customers, who tend to be very loyal, want to find something very special.”