As Raf Simons’ first collection for the storied French house that’s not runway-bound, the designer set out to define his “new classics” with a dose of reality. 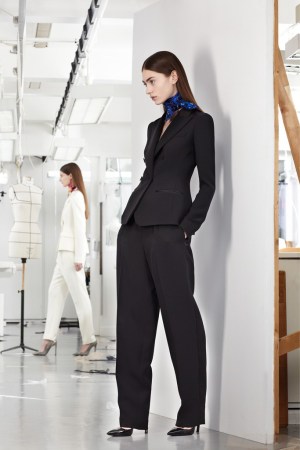 PARIS — For his first pre-fall collection for Dior, Raf Simons wrote another chapter in his modernist makeover of the storied French house, employing the same vocabulary as his couture and ready-to-wear debuts last year.

“New classics” is the term the Belgian designer applied to his latest takes on tuxedo suits, “bar” jackets and such iconic prints and fabrics as florals and Prince de Galle checks. “I wanted to continue exploring the Dior codes we started establishing,” Simons told WWD.

But this being his first collection for Dior not destined for a runway, he strove to accentuate the brand’s sophistication with a dose of reality, headlined by more relaxed fits “for a lot of different body types,” he said.

Coats and dresses also curved forgivingly around hips while still defining the waist, which Simons deems a key Dior signature. One cozy coatdress was worked with the toggle buttons and nonchalance of a duffle coat.

For cocktail and evening, the designer refined and elaborated on some of the ideas from his spring rtw debut: Many short dresses in silk gazar sprouted a swag of fabric on one side for an asymmetric effect, while dramatic floor-length skirts in featherweight taffeta were topped with snug or elongated knits.

Simons brought some couture details and techniques to the collection, albeit, he said, “also in a realistic way.” For example, he married gauzy cable knits to tulle, making them light and transparent but able to take on different volumes.

Newsy, too, were his takes on men’s wear fabrics, etching houndstooth patterns with crystal embroideries across a brief jacket, or obscuring herringbone and check patterns with unusual scales and combinations, even at times showing the reverse side.

Despite the flurry of design responsibilities he’s juggling — he shows his signature men’s wear lineup on Jan. 16, five days before Dior couture — Simons said he’s serene about his step-by-step strategy at the French house. “I want to approach this whole story very slowly. I’m very patient about it,” he said, stressing that the shapes and allure founder Christian Dior pioneered remain “feminine, universal and natural.