The designer said he looked to a “harder, more industrial” color palette for pre-fall. 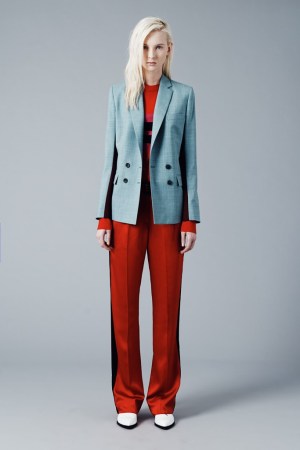 Jonathan Saunders said he looked to a “harder, more industrial” color palette for pre-fall. Taking his cues from images of cityscapes, the collection played with hues such as bright red, pale turquoise, khaki green and vivid pink, with unfussy silhouettes as his canvas. A long-sleeve, knee-length dress was done in an Art Nouveau-inspired print that Saunders had drawn himself and colored with marker pens so it looked  “almost vandalized,” he said. The pattern was a crossover from Saunders’ fall men’s collection, as were a number of pieces in this lineup, such as sporty sweaters and blouson jackets.

The designer also said he wanted to work his pared-back shapes in unexpectedly luxurious fabrics — to wit, an oversize sweater was woven in cashmere, while another simple shift dress was covered in panels of black sequins.