IsSixWeeksAfterFashionWeek = false
By Bridget Foley and Holly Haber on December 11, 2013 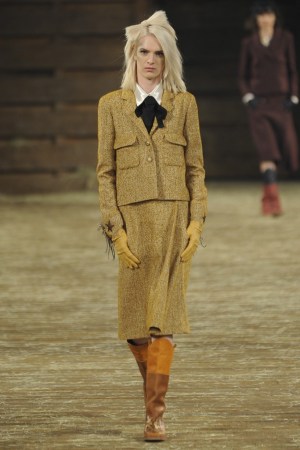 He’s a German-born, Paris-cultivated citizen of the world. But maybe that was all one big, cosmic mistake. Because Karl Lagerfeld would have made one heck of a Texan. Both are bold, brash and fearless. They believe in the power of aspiration and that, with drive, diligence and nonstop hard work, no goal is beyond them. This assumes a baseline of monster talent, and why not? Given their abundant natural gifts, neither Lagerfeld nor Texas bothers with the silliness of false modesty.

Like Lagerfeld, Dallas, the jeweled crown of Texas — where two days after the big snowfall, sidewalks looked pristine and remaining snow banks irritatingly free of New York-like soot — is obsessed with style. Both see it as essential to the human condition as the occasional blue-sky respite at the ranch. Lagerfeld chose Dallas for this year’s staging of Chanel’s annual Métiers d’Art show in homage to the city that welcomed Mademoiselle Coco Chanel in her postwar return to fashion when Paris shunned her. The event had to be major.

And so it was, a brash, over-the-top, three-part extravaganza staged for an audience of 900 that featured imported celebrities such as Kristen Stewart, the face for this Chanel collection, Zoë Kravitz, Dakota Fanning, Lily Collins and Alexa Chung. (At the postshow hoedown, Chung was among the first to brave the mechanical bull.) There was, too, a host of local luminaries including Lagerfeld friend Lynn Wyatt. “For me, she is the Texas woman,” he said. “There is nothing better.” Karen Katz led the sizable Neiman Marcus contingent. On Wednesday, Katz presented Lagerfeld with the Neiman Marcus Fashion Award, the same honor Stanley Marcus bestowed on Coco Chanel in 1957.

“It’s almost like going to the theater, because Karl puts so much thought and time into every detail,” Fanning observed. The Texans concurred, with such assertions as “he really nailed Texas” (Lucy Reeves Wrubel); “the collection was playful and happy and a beautiful event” (Simona Beal), and, “this is unlike anything this town has ever seen” (Stephen Summers, co-owner of Highland Park Village shopping center). At least one guest felt an aura not typically associated with Lagerfeld’s approach to fashion. “It was eclectic, fun and very cowboy chic. You could almost feel the spirituality in the clothing,” said Jessica Nowitzki. Meanwhile, proud consumer Becca Cason Thrash focused on more concrete matters. “It’s going to make a fortune for Chanel because there are so many people who have ranches and country homes,” she said. “I wanted like 99 percent of it.”

The festivities played on the style and history of Texas, or Lagerfeld’s perception of them. (He may read voraciously, but fact-checking research for a fashion show? Come on.) He worked the Paris-Dallas connection with French versions of American pop standards (“Son of a Preacher Man,” “These Boots Were Made for Walkin’”) and an old-fashioned drive-in and a saloon soiree, while invoking Wild West archetypes (or stereotypes, depending upon one’s point of view) and a soupcon of political incorrectness (Lagerfeld’s godson, the tot Hudson Kroenig, made a runway stroll carrying a tiny jeweled pistol). And oh, yes, a lineup of fabulous clothes which, for all of their cowboy-Indian-and-rancher references, were for the most part consummately wearable, at least for those in the rarefied Métiers d’Art demographic, as many Dallas ladies are.

To that end, Lagerfeld thought it high time to give a shout-out to an old business buddy. “In the last year, people were going overboard with the East, China, and so I thought of an homage to America,” he said during a Monday afternoon preview. Alas, as big, powerful and confident as Lagerfeld and Dallas are, neither is immune to the elements. Dallas got blasted by the storm, which caused the diversion of Lagerfeld’s flight to Kansas City for three hours. “I stayed on the plane,” he delivered in his bullet-rapid delivery. “I had my books.” He also had Choupette in tow, another frequent flyer, who whiled the ground-delay hours in her Louis Vuitton kitty carrier made, Lagerfeld said, “especially for her by Mr. Arnault. Her name [is on it]: Choupette Lagerfeld.” (How much more Texas can you get?) Once in Dallas, Lagerfeld & Co. took no time in taking over much of the Rosewood Mansion Hotel, where he conducted his fittings amidst the calm chaos that swirls around every one of his Chanel shows.

The main event was held at Dallas’ vast Fair Park, a masterpiece of Art Deco architecture that offers the kind of endless horizontal space Lagerfeld loves. The drive-in motif accommodated the premiere of “The Return,” the short film Lagerfeld directed about Chanel’s return to business. It stars Geraldine Chaplin — brilliant, as the aging, uncharacteristically insecure Chanel — and Amanda Harlech, who offers a mean American accent as Bettina Ballard, the supportive editor of American Vogue. Once again, Lagerfeld’s set was remarkable, a vast lot featuring four giant screens, assorted food and drinks stations, and 74 vintage roadsters imported from all across the U.S., both superflashy convertibles and tough-guy pickup trucks, from which guests would watch the film.

After the screening, the crowd exited the building and crossed the bridge that had been constructed over a fountain leading to the next stop, a huge barn-cum-runway appointed with raw wooden seating and aged-looking flags hung from the ceiling: Texas, U.S., France, Chanel. Guests took their seats to the strains of a harmonica’s wail and the show started, a masterpiece of lavishly embellished practicality that is a hallmark of Lagerfeld’s brilliance. First out: suits — rich, earthy tweeds, utterly elegant, their Texas touches limited to a scaled-down cowboy hat or two-toned boot. But soon, the references rolled in with blanket stripes, wrinkled leathers and prairie skirts. A fabulous passage played denim (dresses, skirts and skinny jeans) off of white frills. Fluid dresses (a beauty on Joan Smalls was bedecked with Texas stars) and sturdy A-line skirts swung Seventies; Lagerfeld noted accurately that one dress “has the look of my Chloé [back in the day].” And speaking of references, how could a big, cozy, Aztec-motif sweater not recall America’s own maestro of Southwest chic, Ralph Lauren?

Everywhere there was fringing, feathers, beadwork and remarkable fabrics treatments, all with the look of the Southwest and the craft of Chanel’s specialty ateliers. One had to get up close to see that the shiny jacket was gold-leaf lacquered onto denim, that the fringing on the sleeves of a romantic blouse was finely sliced, paper-weight leather, and that the single feather in each model’s hair was patterned from pieces put together in meticulous collage.

It was very Texas, and Lagerfeld at his showman’s best. And that’s a powerful combination.