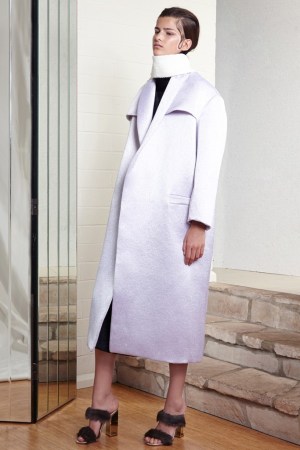 For her first pre-fall season, Kym Ellery showed a knockout collection full of wonderfully interesting, wearable pieces. Tailoring, which is a pillar of the seven-year-old line, was notable in the voluminous felted wool outerwear and sleek suiting done in either bonded velvet or brocade.

Ellery’s modern take on evening was also striking, including a bell-sleeve shift dress and an origami strapless top and midiskirt constructed in windowpane organza fused to silk mesh.