As her main inspiration, Perry cited a black-and-white photo of architect Philip Johnson standing with a model of a building featuring striking exterior lines. 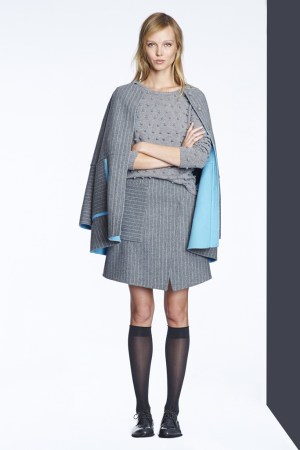 As her main inspiration, Lisa Perry cited a black-and-white photo of late architect Philip Johnson standing with a model of a building featuring striking exterior lines, some of which overlapped. The image informed Perry’s new graphic pattern for the season, which came on looks such as a loose-cut dress and a top.

Perry also infused her clothes with a distinct men’s wear feel via pinstripes — horizontal and vertical mixed together on panels — and subtle windowpane patterns. The latter provided the motif for a wool flannel sweatshirt and slouchy pants — a boyish look that was a clear and cool departure for the designer.