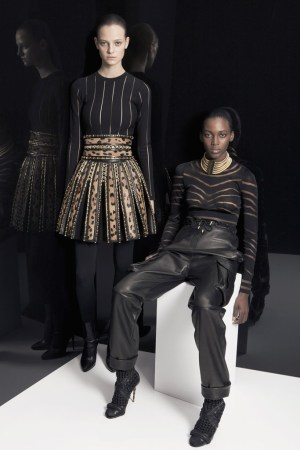 When combing through Pierre Balmain’s couture archive, Olivier Rousteing was surprised to find a panther-printed evening dress. It became the starting point of his pre-fall collection.

The motif, not obvious in the Balmain vocabulary, gave way to an African safari theme, further inspired by photographer Peter Beard’s work — the wild beauty of the African landscape and the graceful beauty of Somalian model Iman — who Beard discovered in the Seventies. It created an ideal canvas for Rousteing to work both a casual and glamorous side with, respectively, earthy utilitarian pieces and eveningwear echoing the disco days of Studio 54. Army green shades were prevalent as were warm-colored panther prints and graphic zebra stripes worked on myriad versions of the safari jacket, from ones in casual washed cotton to soft leather. Chic black tuxedo styles were paired with fluid jogging pants or midcalf-length skirts.

Knitwear was a large part of the lineup, also done in the animal motifs and used for a body-conscious cable-knit top and skirt.

The more sporty-street feel came via oversize bomber jackets, some embroidered macramé-style with ropes and crystals for a look Rousteing described as slightly Nineties hip-hop.