This collection is the first in a series aimed at marking 200 years since the brand’s founding, and Massimo Nicosia didn’t stint on the local references. 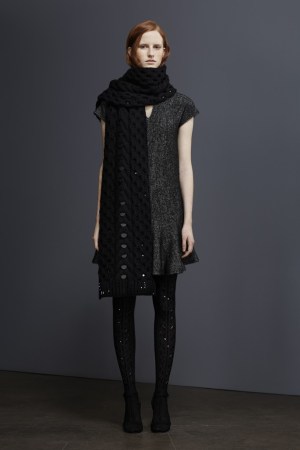 This collection is the first in a series aimed at marking 200 years since Pringle of Scotland’s founding, and designer Massimo Nicosia didn’t stint on the local references. There were wool jersey dresses with silk embroidery inspired by Scotland’s national emblem, the thistle; coats made of fur shaved into subtle patterns mimicking the classic Aran and argyle stitches; and wooly tights embellished with sequins arranged to resemble a herringbone pattern.

The focus for pre-fall was also on knitwear as outerwear, and that meant swingy dresses done in thick Milano stitching, as well as dresses fashioned with built-in capes in a nod to Pringle’s history of making twinsets.

Nicosia’s cozy collection also came with a dash of dark glamour in the form of iridescent skirts reminiscent of a beetle’s body armor, and details inspired by the gilded hinges on the stark wooden doors of The Palace of Holyroodhouse in Edinburgh, Queen Elizabeth’s official residence in Scotland.